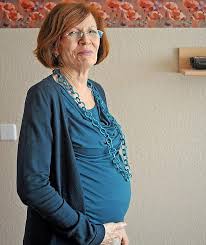 A 65-year-old Berlin woman, Annegret Raunigk, who already has 13 children and seven grandchildren is pregnant again and may deliver quadruplets. The woman confessed that she decided to try for another child because her youngest daughter, aged nine, wanted a little brother or sister.
It was reported that the pregnancy follows several failed attempts at artificial insemination over the last 18 months and that the pregnancy had gone without any major complications so far.
Raunigk would be the oldest mother of quadruplets even as she was quoted as expressing “shock” when she was told of her pregnancy, adding: “after the doctor discovered there were four, I had to give it some thought to begin with,” she said.
“I’m not actually afraid. I simply assume I’ll remain healthy and fit. In matters of organisation I have enough experience, that’s not new for me,” she said.
This is not the first time Raunigk has made headlines, for 10 years ago, she was in the news after giving birth to her 13th child, Lelia, at the age of 55.
[myad]