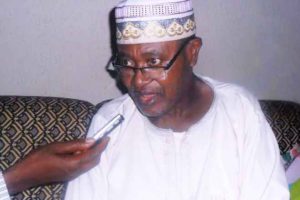 Early in 1988, the Gongola State government under the leadership of Group Captain David Jang had some problems on how to manage its media.
Mallam Abdulkarim Albashir, a veteran journalist at the Federal Radio Corporation of Nigeria (FRCN) in Kaduna had been loaned by the state government to start its own newspaper in 1985. He was expected back at the radio station the following year. When 1986 came, the State government wrote to the station explaining that Albashir was still needed for another year and requested for an extension of his stay. This was given. Then 1987 came and the government was not ready to let Albashir go. Again an extension of one year was made, again the request was granted. By 1988 when the government still demanded another extension, the radio station shouted “ENOUGH” from Kaduna. The request was refused.
Albashir had performed the impossible task of starting a newspaper- he called it the Weekly Scope- for the state government a few weeks after he assumed duty in Yola in 1985. With no staff, no infrastructure and no facilities, he nurtured the Weekly Scope to an enviable status in 1988: it was the only newspaper in the whole of the north east sub region. At that stage, the Gongola state government felt it could not find a replacement for him if he left for Kaduna. The refusal of FRCN Kaduna to extend his stay thus created a big problem.
The solution was provided for the government by Albashir himself. One fateful day, he walked into Governor David Jang’s office and argued that he was not indispensable and he had found a replacement for his office. ‘Who is that?’ The perplexed governor asked; ‘Your Chief Press Secretary Sir’. Albashir replied.
I joined the government of David Jang as his Chief Press Secretary in 1987 after he wrote to the Kano State Government led by Mohammed Ndatsu Umaru requesting that Emmanuel Yawe be seconded from the Kano state owned Triumph newspapers where he was working as an Editor. Albashir’s solution created yet another succession problem. The governor was not ready to let me go. But he could not keep Albashir in Yola either.
In the event, the most unusual thing happened. After Albashir’s departure, I was appointed as his successor even as I remained the Chief Press Secretary. It remains an oddity in my rather turbulent career as a newspaperman. Here was I: one man with two offices – Chief Press Secretary to the Governor and Managing Director of the state’s newspaper.
In order to sort out the oddity, I did frequent shuttles to Kaduna. Albashir was coming back to Kaduna but he had no intention of staying long with the FRCN. He had been with the station since 1974 when he completed his NYSC stint. His transition from electronic to print media in 1985 was rather seamless and he made up his mind to remain in print. The Democrat newspaper in Kaduna had offered him the job of Editor and he was going to take it up.  Mal Abba Kyari who was Editor of Democrat then (current Chief of Staff to President Buhari) was appointed Managing Director of UBA and was waiting impatiently for Albashir to come and relieve him. I travelled to Kaduna frequently to reassure him and also scout for my replacement as Chief Press Secretary. Eventually, we had a breakthrough: Kingsley Hunohashi took over from me and Albashir took over from Abba Kyari.
The Albashir I knew was a giant physically. Beyond that, he was endowed with prodigious intellectual vigor and physical energy. His radio commentaries and newspaper columns were backed up with facts and figures that were products of painstaking and diligent research. He spent sleepless nights to make sure that what he put out in public space must stand the test of close scrutiny.
Albashir did not only have a seamless transfer from electronic to print media. As his health deteriorated in later ears and his movement became impaired by the amputation of his leg, he went digital. He gave the young men and women who think the social media is meant for them exclusively a good run for their money. We were friends on facebook and I followed him and his informed commentary daily.

The Albashir I knew was a free minded Nigerian, a patriot who loved humanity. He mixed freely without care of religion and ethnicity. He was a Muslim, yes. But every Christian that came close to him will never say he discriminated against him. When I took over from him at Gongola Press Limited, I did not inherit any form of religious or ethnic tension. He blazed the trail of religious and ethnic harmony in a heterogeneous state institution. I tried my best to step into his oversized shoes.
Here was one Nigerian who had all the opportunities to amass filthy wealth but did not. He valued knowledge and invested heavily in it. His personal library was well stocked. His children received the best education. In retirement, he returned to his rural roots, investing all he had in his modest farm in Kaduna.
We had a wonderful working and personal relationship. But Gongola was a state of complex contradictions. We almost parted ways after he came back to Gongola Press, appointed in 1989 by the state government as Board Chairman and a serious board room crisis erupted. Happily we got over it all.
We remained more of brothers than friends, often sharing our hopes and frustrations until he died. I will miss him greatly. [myad]