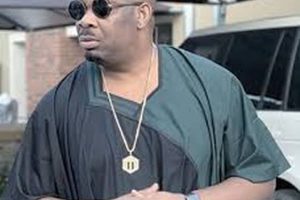 Music producer and musician, Don Jazzy, has said that he is still searching for the right woman to marry.
The music mogul, who turned 37 on November 26, said in a post on Instagram today, December 4 that he is working on getting a wife following requests from fans.
“You see, I listen to you guys. I’m facing front today, I’m smiling, my clothes are ironed but I’m still not married sha.  I’m still working on that one,” he said.
Don Jazzy’s prolonged singleness was one of the highlights of fans’ requests on his 37th birthday.
Some musicians in the country joke about the music producer’s singleness in their lyrics.
Korede Bello, one of the artistes that was signed to Don Jazzy’s Mavin Records, in his 2016 single ‘Mungo Park,’ taunted his boss for his unmarried status.