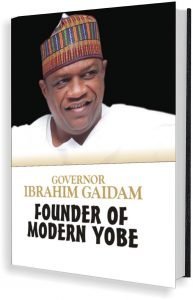 A book, titled: “Governor Ibrahim Gaidam: Founder of Modern Yobe,” detailing his ten year stewardship of Yobe state is billed to be formally presented to the public next week Monday, April 29 in Damaturu, the State capital.

According to a statement signed by Mohammed Zanna Abba on behalf of the launching committee, the public presentation will chaired by the State Governor-Elect, Alhaji Mai Mala Buni. He was, until his election as the governor of Yobe State, Mai Mala Buni was the National Secretary of the ruling All Progressives Congress (APC).

The statement said that President Muhammadu Buhari and Vice President Professor Yemi Osinbajo are expected to serve  as Special Guest of Honour and Guest of Honour, respectively while President of the Senate, Dr Abubakar Bukola Saraki; Speaker of the House of Representatives, Yakubu Dogara and the Acting Chief Justice of Nigeria, Justice Ibrahim Tanko Muhammad will serve as at the event distinguished guests.

It said that governors, ministers and other political and business leaders will be part of the event to be hosted by the Deputy Governor of Yobe state, Engineer Abubakar D. Ali.

The statement said that the Emir of Fika and Chairman of Yobe State Council of Chiefs, Dr Muhammadu Abali Ibn Muhammadu Idrissa, will serve as the Royal father of the Day even as the book is scheduled to be reviewed by Professor Danjuma Gambo, the Dean of Faculty of Social Sciences, University of Maiduguri.

The 303-page book, comprising 12 chapters, takes the reader on an edifying voyage across the vast sea of Governor Ibrahim Gaidam’s life and experiences which gleam of a fine intertwine of brevity, kindness, quest for knowledge, prudence, visionary leadership and submission to the will of God.

The book also burrows into the governor’s personality, examines his principles and highlights the factors that make him triumph where others stumble. Not to mention his refreshingly different brand of leadership which has enabled him to record remarkable achievements even when Yobe state was in the throes of unprecedented onslaught from Boko Haram insurgents.