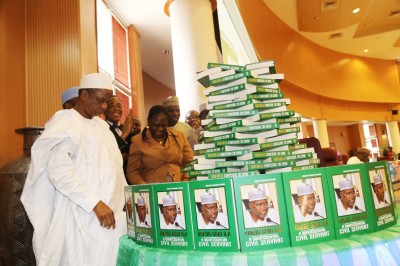 It is a common truism that no legacy is more potent in human society than that of education, and of course, acquisition of Knowledge. Even knowledge has its own grades, and the highest of it is knowledge of history, for, the future most times, derives its ingredient on the past.
Indeed, the history of an accomplished personality as it evolves and generously documented, has the capacity of shaping the future of the people in the society: talk of people like Chief Herbert Macaulay, Sir Abubakar Tafawa Balewa, Sir Ahmadu Bello, the great Sardauna of Sokoto; Chief Nnamdi Azikiwe, Chief Obafemi Awolowo and several others.
It follows that a society may progress or retrogress depending on the uprighhtness or otherwise of the forebears, as may have been recorded in history. Conversely, unrecorded socio-economic and politico-cultural gladiators has the capacity of throwing the society into the darkness of its past.
It is within the context of the necessity to continually update the content of the history and the component of it that a budding author and practicing Journalist, Abdullahi M. Gulloma cornered the immediate past Head of Nigeria Civil Service, Ahaji Bukar Goni Aji for a detail treatise on his life and time as, obviously, an acknowledged accomplished civil servant of long standing.
The book, titled: BUKAR GONI AJI, A QUINTESSENTIAL CIVIL SERVANT came out to throw light on the history of this first-class civil servant. The book elicits knowledge for the benefit of the future generations and set, in the main, to play relevant role in the advancement of the future generations, within the confine of Civil Service.
In the foreword to the book, a biography, President Goodluck Jonathan says: “for me in particular, the story of Aji’s life of humility, hard work and dedication makes interesting reading” even as he recommended it to researchers, scholars and students of public service and history as well as general public.
The 447-page book is divided into two parts. Part one of 12 chapter, deals essentially with his entire life, from birth upto the time he retired as Head of the Civil Service of the Federation a couple of months ago. The Part ends with several inspiring speeches of the subject and press statements and releases from his office, most of which were signed by the Director of Communications in his office, Dr. Tope Ajakaiye.
Part two of the book which begins from page 283 and ends in page 447 are cuttings of newspapers, magazines, radio, television and online media publications on the activities of Bukar Goni Aji all through his tenure.
The book is enriched with each chapter beginning with a quote from great philosopher and legend of the history, as, for example, the quote on page 39, from former Ford Motors Chief Executive, Lee Laccaco who said: “Get all the education you can, but then, by God, do something! Don’t just stand there, make something happen. It isn’t easy, but if you keep your nose to the grindstone and work at it, it’s amazing how in a free society you can become as great as you want to be. And, of course, also be grateful for whatever blessings God bestows on you.”
Another interesting part of the book is in chapter ten, from page 123 to 164 where Goni Aji’s inspiring words, quoted from his different speeches are reflected. The chapter is titled: “Nuggets Of Mind.” One of such quotes goes thus: “As civil servants, we shall re-dedicate our commitment to the government and Nigerian people, thereby strengthening the bond of trust between government and the citizenry through the exhibition of high sense of honesty, transparency, accountability, moral and ethical behaviour.”
Having said that, it is noted however, one or a few defect are discernable in the book. For instance, some captions on the photographs are incomplete. The caption on the picture in page 65 “He doesn’t joke with his holidays” is vague. So also is the caption on the two pictures in page 66: one saying “Refreshing his mind abroad.” Where in abroad? Readers would be eager to know and the second picture with caption “With his first daughter, Fatimah” born which year? Readers would also be interested in knowing.
Though the knowledge that Goni Aji was loved by media and that his words were adequately captured in such media of communications was refreshing, but the fact remains that the media reflection of him in the book is over-bloated. Devoting 161 pages in the book to treat just the media portrait of Goni Aji almost robbed it of the beauty in narration and making it boring. The press releases and statements from his office, signed mostly by the media aide, should not have been featured or even given prominence in a book that is supposed to solely focus on the subject matter.
However, in all, the book is a great effort in the direction of documenting a great, accomplished and outstanding civil servant of our time for the benefit of the generations yet unborn.
Like President Jonathan says in the foreword to the book, researchers, scholars and students of public service, history, politics as well as the general public will find this book most valuable; in the acquisition of useful modern knowledge in that direction. [myad]