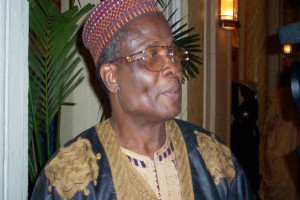 Two things captured my attention immediately a copy of the book titled: BUT FOR GOD was graciously handed to me by no other person than the author himself, Dr. Aaze Thomas Adaba. One of the two things is the photo of him and his wife in, wait for it, romantic posture, featured at the back page of the 637 page book with caption to it thus: “At our 50th wedding anniversary, the Lord has blessed us with 6 biological children, 2 adopted ones and 16 grandchildren.”

The second one are the words of dedication in the book on page one, which read: “To God Almighty, The Height of Might, The Tower of Power, The Sole Authority of our Lives, The Infinity in Glory, The Sole Creator of Time, Space and the Universe, I dedicate this work in Thanksgiving for His infinite love and care for me and all about me. By His grace I am. To Him I owe all.” 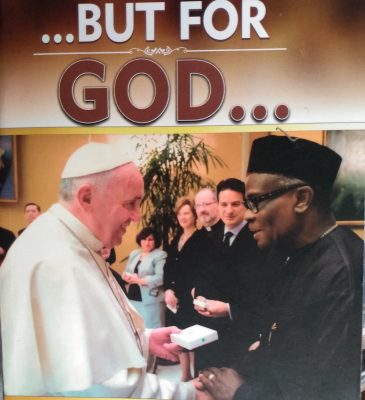 The words of dedication are not just an acknowledgement of the indisputable hand of God in all his life and living on this earth, but also a sign of absolute submission, in prostrating posture, without intervening factor, to the same God. The words appear to have set the tone of the entire book, and can be said to represent the summary of the thought of the author. The back page photo and its caption show the creativity and thought of the author, i.e. as in saying: after all said and done, here we are, my wife and I, awaiting God’s next step in our lives.

If the author had commissioned me to write the book on him, I would have titled it, going by the content therein as: “Tom Adaba Gives Everything To God” and may add: “In Absolute Submission.” But I might not have been as detailed, in-depth, creative as the master himself. For, Dr. Tom Adaba as he’s fondly called by his admirers, including yours truly, is a renowned erudite scholar, flawless orator not only in Queen’s English but also in his native language, Ebira from Kogi State of Nigeria; a respected teacher, a technologically based broadcaster and politico-business guru. 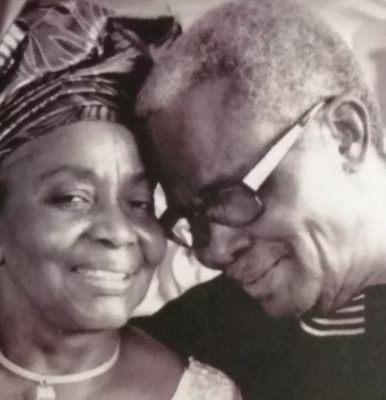 He has every reason, every cause to give everything he has become to God, from the account of the event leading to, and the circumstances of his birth, as he narrates in the first three chapters.

He’s modest enough to acknowledge that the circumstances of his birth were narrated to him by Pa Joseph Abara Adaba.

In Ebira culture, such circumstances preceding his birth made him “a child of name” directly translated. His mother, Mrs. Mary Oniya Adaba had given birth to three children before him but they all died at infancy. It was one Parish Priest, Rev Fr Thomas Duffy who prophesized that the next child of Mrs. Mary would be male who would survive series of child deaths in her life. The Priest prophesy came to pass, resulting in the parents naming the child after him, i.e. Thomas.

Therefore, his first name, Aaze is a quick reminder of where he is coming from, for Aaze means “if it’s or he’s allowed” to manifest or to live.

The circumstances of his birth also included the fact that his father was conscripted into the British West Africa Frontier Force for operations in India and Burma in the Second World War (1939-44) at the time his wife took in for Thomas. The father didn’t return from the war front until the end of the war in 1944 when Tom, who was growing up in his forester father’s house, was already over eight years old.

Such circumstances of his birth and early years in his life were later to run through the major part of his life: jumping from one unforeseen fortune and blessing of God to the other amidst lurking uncertainties. It was like swimming comfortably in an ocean full of sharks and dangerous reptiles.

However, like any other creation of God, Tom narrates, from page 226, a sordid experience he encountered in an unlikely place when he was in NTA (Nigerian Television Authority), where he stagnated for a long time on Grade Level 15. When he complained to his superior officer who happened to be his friend, about the bad treatment regarding a quit notice for him in his accommodation in Lagos and lack of promotion for a long time, the boss cum friend told Tom: “Yes, I ordered the quit notice…” and “l honestly tell you I don’t know what you are doing here. As far as I am concerned, I do not recognize your assignment. You have no assignment here that I know of.”

That was perhaps, the first time, on page 229, he would ever shed tears as an adult, as he says: “shock, perplexity and utter disappointment were words too weak to describe my state of mind at the time he uttered the statements…l barged out of the office with tears welling in my eyes.”

As human being created by God living in our own kind of clime, the author also tasted incidence of robbery attacks and other forms of societal foibles, but as he concludes: that he survived all such foibles, tumbles, tribulations and hiccups, by men and nature’s arrangements, proved the high level of God’s attention to him and his family.

Indeed, it is impossible for one to adequately capture most of the essential parts of the book in a review such as this. This is backgrounded in the foreword to the book written by no other personality than the Catholic Archbishop of Abuja, John Cardinal Onaiyekan who wrote: “he has achieved significant success in his chosen profession in the communication field. In his family life, he is clearly a role model for many, especially for the younger couples facing chaos and disorder in an important area of human life. If we can talk of any “secret” from his successful life, he will be the first to submit that it is all by the grace of God, to whom he has shown great devotion at every moment of his life. This publication will highlight some major elements in this exciting romance with God…Dr. Tom Adaba has done well to screw up his courage to get this publication out now, before it gets too late…his journey is not yet over…”

What is possible from this review is for one to touch on one or two points as a way of creating a leeway for readers to understand, appreciate the import of the work and go out there to possess copies to read. You won’t regret doing so.