Home ART & ENTERTAINMENT I Won’t Mind To Be Fourth Wife If I Get The Right... 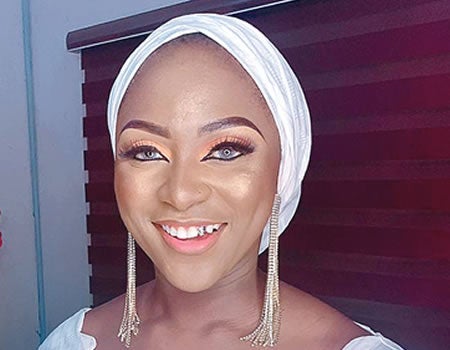 In this interview with Segun Adebayo, actress Mariam Odunola Muftaudeen, popularly known as Omo VC, has managed to stay consistent. She reveals the secrets of her success and how actresses have fared generally in the movie industry.
Which movie signalled your turnaround in the movie industry?
My first production entitled “Omo VC” gave me a turnaround. It gave producers and directors an impression about what I am capable of bringing into their projects.
How successful are you on the job?
I can’t specifically measure my success. However, I can say that being active and relevant till now in itself is a demonstration of success. I cannot dispute the fact that being consistent worked and continues to work for me.
The movie industry is getting more competitive by the day and female celebs reportedly do all kinds of things to stay relevant. What’s your take?
The truth is that every person has their respective reasons and targets for joining the industry. However, competition has been a bone in the neck for most practitioners, particularly female celebrities. They want to wear the latest designers, see the world on vacation every month, use the latest cars and gadgets. All these and more will only push people to more occupational and psychological stress, leading to feeling of low self-esteem and inferiority.
How difficult is it for an actress to get a responsible man without an ulterior motive?
Love is a relative idea. One man’s meat is another man’s poison. Being an actress or not doesn’t determine if one would have a responsible man as partner. It is just that the recent trend of uncultured actresses has cast the focused ones in a bad light. A situation where Instagram actresses are more than real practitioners is an appalling one.
How do you manage to keep your game tight knowing that there are many who want what you have?
Since I joined the industry, I have always placed my head high and focused. Despite the distractions, I chose to stick to the rules of engagement, which is being committed. I think that has worked effectively for me so far.
Would you act nude if the money is tempting enough?
I can never act nude, not even for the highest offer of millions. I cherish my body, mind and sanity. Whatever an actor does for the sake of fame, we should remember that the internet never forgets. I can’t take up a role I won’t be proud to let my children and grandchildren watch in the future.
Was there any role you wish you had taken but was given to a colleague?
I don’t think there was any.
People say the new crop of actresses are too desperate for fame.
Sincerely, I can’t speak for or about them. What I am sure about is that time will tell. If an actor or actress lacks quality training or practice ethics, they go through back doors to get roles and do unthinkable things.
Some of your colleagues say acting alone doesn’t pay the bills. How are you coping?
Acting is expected to be a lucrative job in Nigeria the way it is in other countries. Due to some circumstances, however, the industry isn’t settled enough. I can state that seven out of 10 actors don’t live on acting. They have other means of survival. And they service their acting career with the money they get from their other businesses. I am also not exempted from this situation.With the state of things and structure in the industry, do you think Yoruba movie industry is growing?
See also:  As Max Amuchie, A Worthy Journalist, Grabs Another Honour, By Ken Ugbechie

Truly, the Yoruba movie industry is growing, yet there is a lot of things that need to be done. I believe the industry will be better if the leadership can focus more on membership data/status and proper sanction for erring practitioners. An association without discipline will collapse. I have confidence in the leadership of TAMPAN led by Mr Latin. His administration has brought new touch to the industry.
As a Muslim and an Alhaja, are you in support of a man marrying as many wives as he wishes?
Marriage is a delicate topic that I am always cautious to discuss because it cuts across various faiths with personal interests and different kinds of persons involved. But as a Muslim, my religion gives room for a man to marry more than one wife with clear explanations that such a man must create balance on the home front. If a man doesn’t have the financial, mental, physical and psychological capacity to marry more than one wife, he is not expected to go into polygamy. I however don’t have any issue with polygamy as long as there is adequate care and respect among the parties involved. Personally, I like married men more than single guys because I have never been lucky with single guys. As it looks, I might end up being second, third or even fourth wife, I don’t mind as long as I am happy.
Would you quit acting if your man wants you to?
First, I can’t marry someone who doesn’t have interest in my profession. Acting is my pride and it gives me joy. Before going into relationship, my man must have been aware of how passionate I am with acting and filmmaking. So, his unconditional support is non-negotiable.
How many movies do you have to your credit as a producer?
To the glory of God, I have produced seven movies so far and I hope to do more.
Which projects are you working on?
I’m currently working on an epic movie and it will be shot in cinema standard. By God’s grace, I’ll also be changing my production company’s name from Mariam Akande Productions to Mufty Production. Mufty is from Muftaudeen which is my surname.
When are you settling down?
Settling down isn’t something that is predictable, so I’m waiting for God’s time and a God-fearing partner.