Home ART & ENTERTAINMENT I’m A Performer, What I Do On Stage Doesn’t Reflect My Life,... 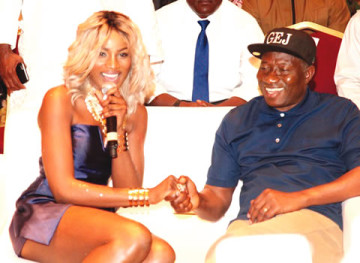 A popular female Singer, Seyi Shay who posed naked as he met with President Goodluck Jonathan in Lagos recently has made it clear that she is a respectable lady and was not planning to seduce the president in any way.

Seyi, who reacted to floury of criticisms over her seductive dressing when she had a handshake with the President insisted that what she does on stage as a performer does not reflect her everyday life.

“I am a very respectable young lady and I was not in any way trying to seduce the President with the outfit I wore. I had two outfits for the event, one was for my performance and the other was worn after I performed. The dress I was pictured in with the President was what I wore during my performance.

“I came on stage and greeted everyone according to their culture and I did the same for Mr. President. He was impressed and he asked where and how I knew how to greet in his native dialect and I said I learnt it. That was what brought about the giggling and smiles in the picture. I’m a performer and what I do on stage doesn’t reflect my everyday life.

I had two outfits on that day and it was a youth event. Who wouldn’t feel overwhelmed meeting the President? Well, I did and I felt honoured because it is not every day you get to meet the president of your country.”

The picture where the singer, wearing an incredibly short dress, while sitting beside the president, went viral and so many fans and foes have expressed their feelings concerning Seyi’s outfit.

Many people, including celebrities and notable figures such as comedian Wale Gates; social analyst, Omojuwa, took to their social media accounts to express their feelings over her choice of outfit. [myad]