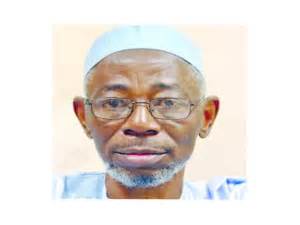 President Goodluck Jonathan has said that he received the news of the death of Alhaji Abubakar Gimba with sadness, describing him as very distinguished writer and former President of the Association of Nigerian Authors.
President Jonathan said that Gimba, a literary icon, left behind a legacy of notable works such as Witness to Tears, Sunset for a Mandarin, Trails of Sacrifice and Innocent Victims.
The President believed that the late Gimba, who also had a successful career as an administrator, banker and public servant, will be long remembered for his humility, diligence, dedication to excellence and the profound understanding of human affairs exhibited in his writings.
He asked members of his family, his fellow authors and all who mourn him to take solace in the knowledge that the much admired writer’s beliefs, views and insights will live forever through the body of works he has left behind for present and future generations.

Abubakar Gimba died yesterday at the Minna General Hospital, at about 11:50pm, after a prolonged illness. Aged 63, Gimba was born on March 10, 1952 in Nasarawa town of Lapai Emirate and obtained his first degree at the Ahmadu Bello University (ABU), Zaria with a BSc in Economics in 1974.

He then went to the University of Cincinnati, Ohio, in the USA 1976 for a Masters degree, where he obtained an MA in Economics. He subsequently attended the University of Bradford for a UK’s Project Planning Course on Infrastructure in 1982.

Gimba was previously executive director of United Bank of Africa (UBA) and Union Bank of Nigeria and permanent secretary of Finance and Economic Planning during David Mark’s time as governor of Niger State and was one-time special adviser of Mark at the Senate.

He was once the national president of the Association of Nigerian Authors (ANA), ABU Alumni Association and chairman of the Concern Foundation and Savannah Publications Ltd and was the pioneer chairman of IBB University.

He holds a master’s degree in economics from the University of Cincinnati, and has travelled extensively throughout Europe, Southeast Asia, and the Middle East. He took part in the IWP on a grant from the US Department of State.

He is the author of several novels, including Witness to Tears; Trail of Sacrifice; Innocent Victims; Sunset for a Mandarin, and Golden Apples.

Abubakar Gimba is a recipient of the Order of the Federal Republic (OFR), a prestigious merit award from the federal government. He is survived by three wives and many children.

In a brief comment on his death, president, Gamji Members’ Association, Malam Abdullahi Bala Isa said; “Gimba was a leader who is always willing to encourage the younger generation. We will continue to cherish his exemplary leadership attributes, which Nigeria will sure miss and I pray Allah grant him Aljannatul Firdausi.” [myad]