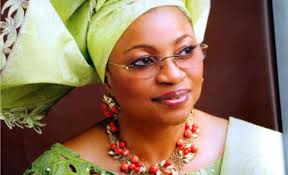 A Nigerian billionaire businesswoman, Folorunsho Alakija has emerged in the Forbes estimation, as one of the World Powerful Black Women for the year 2014. Alakija is named along with veterans like American TV mogul, Oprah Winfrey, American singer, Beyonce and other women who have established themselves as leading lights in media, politics, philanthropy and business.

Alakija is the co-founder of Famfa Oil, a privately-held Nigerian exploration and production company that owns a lucrative stake in one of the country’s most prolific oil fields.

This was contained in the annual ranking of the World 100 Most Powerful Women  published by FORBES. It is the definitive guide to the female icons and ground-breakers in business, entertainment, politics, diplomacy and philanthropy who wield the greatest impact on the world stage. Of the 100 women featured, 12 are black, up from 11 last year with the latest being Folorunsho Alakija

Here are the 12 most powerful black women in the world.

America’s first lady is putting her platform to good use: fighting childhood obesity, promoting healthier eating and launching an initiative that aims to increase the number of low-income American students who go to college. In 2012, she authored “American Grown,” a coffee table book about growing veggies and tomatoes on the South Lawn of the White House.

The 60 year-old media mogul is the only African-American billionaire in the world with a net worth estimated at $3 billion. Winfrey hit the big time through her flagship daytime TV show which aired for 25 years between 1986 and 2011, before she bowed out to channel her energies to her own cable network, OWN. The once-struggling network became cash-flow positive in 2013. Winfrey was part of a consortium of billionaires that included Oracle CEO Larry Ellison and billionaire media executive David Geffen who bid for LA Clippers basketball team but lost to former Microsoft CEO Steve Ballmer. One of the world’s most generous women, she has given millions to educational causes across the world, chief among them being the $100 million she has spent on the Oprah Winfrey Leadership Academy for Girls in South Africa.

Burns was appointed CEO of Xerox in 2009, and over the last 5 years, she has worked tirelessly towards transforming the company’s image as a manufacturer of printers to a full-fledged services business. And it’s working well. Services now represent 57% of the company’s $21.4 billion full-year revenue and could possibly account for two-thirds by 2017. Burns joined Xerox as a summer intern in 1980 and joined the company permanently in 1981 after completing her masters at Columbia University.

2013 was an eventful year for Beyonce. She sang for President Obama, performed at the Super Bowl, and headlined the most profitable tour of the year by shocking the world with a surprise “visual album” in December. It became iTunes’ fastest-selling album ever, selling 828,773 units in the first three days. Along with husband Jay-Z, Beyonce will be co-headlining the On The Run Stadium Tour which kicks off on June 25, and will feature 18 shows across North America.

Brewer became CEO of discount membership club and retailer Sam’s club in 2012, becoming the first woman and first African-American to head a Wal-Mart subsidiary. The $56 billion (revenues) division of Wal-Mart has operations in the U.S, Brazil and China, 110,000 employees and boasts over 47 million members. A former executive at Kimberly-Clark, she joined Wal-Mart in 2006 and previously served as president of the retail giant’s Eastern U.S. business division. She is chair of the board of trustees for Spelman College.

Joyce Banda failed in her attempt to win a second term in office after losing out in Malawi’s May presidential elections to Peter Mutharika, a brother to the country’s former president, Bingu wa Mutharika. It’s been a humiliating end to what could have easily been a glorious political career for Malawi’s first female president. Banda became Malawi’s ruler in 2012 after the death of Bingu wa Mutharika. She started off relatively well – selling off the presidential jet, announcing a cut to her salary, loosening foreign exchange controls and even devaluing the Kwacha at the recommendation of the International Monetary Fund. But she lost all goodwill in the wake of the infamous ‘Cashgate scandal’, in which millions of dollars were embezzled by top civil servants in one of the most brazen cases of corruption the country has witnessed in its recent history. Banda is the founder of the Joyce Banda Foundation International which supports projects aimed at empowering market women and providing orphans with access to education.

Cousin was appointed executive director of the World Food Programme in April 2012. Between then and now, she has fed 177 million people. In 2013, and under Cousin’s leadership, WFP raised $4.2 billion in contributions from governments, corporations, foundations and individual donors. The funding will help WFP’s 13,500 employees who work in 83 countries fight hunger brought on by drought and civil war in Syria, as well as by violent conflicts in South Sudan and the Central African Republic.

Gayle is the President and Chief Executive Officer of CARE USA, a leading humanitarian organization which actively fights poverty in 87 countries by responding to natural disasters, climate change and other causes of global poverty. She was appointed to the position in 2006. In November 2012 when Typhoon Haiyan struck the Philippines, Gayle led CARE on the ground, providing food, shelter and supplies. Within six months, CARE had provided relief to more than 300,000 people.

Ngozi Okonjo-Iweala, Coordinating Minister of the Economy and Minister of Finance, Nigeria

The Nigerian economist is the country’s Coordinating Minister of the Economy. She was appointed by Nigeria’s President Goodluck Jonathan in 2011 while she was a Managing Director at the World Bank. She was previously Minister of Finance during the tenure of former president Olusegun Obasanjo.

Lavizzo-Mourey heads the Robert Wood Johnson Foundation, the largest healthcare foundation in the U.S. She became the CEO in 2003, a position which has her overseeing an estimated 800 grants, a $10 billion endowment and annual disbursements of more than $450 million towards improving health care. Lavizzo-Mourey is the first woman and the first African-American to head the foundation.

Africa’s first female head of state won the 2011 Nobel Peace Prize for her work in promoting Liberian reconciliation and  in atoning for Liberia’s history of civil war. She was re-elected for a second term the same year, reneging on an earlier promise to run for only one term in office. Today she is ramping up efforts to bring foreign investment to her impoverished nation ($700 GDP per capita and an estimated 64% of its population live below poverty line).

Alaikja, Nigeria’s first female billionaire is a new entrant to the league of the world’s most powerful women. After working as a secretary in a Nigerian merchant bank in the 1970s, Folorunsho Alakija quit her job to study Fashion design in England. She subsequently founded Supreme Stitches, a premium Nigerian fashion label which catered exclusively to upscale clientele, including Maryam Babangida, wife to Nigeria’s former military president Ibrahim Babangida. The President awarded her company, Famfa Oil an Oil prospecting license which went on to become OML 127, one of Nigeria’s most prolific oil blocks. Famfa Oil owns a 60% stake in the block. In 2008, she founded The Rose of Sharon Foundation, which works to help widows and orphans. And in 2013, she was appointed the vice chair of Nigeria’s National Heritage Council and Endowment for the Arts. [myad]