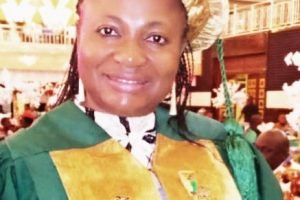 When the Nigerian Society of Engineers conferred the Fellowship of the Institute on Omodele Adesola Arowolo on December 12, 2019, they confirmed by accolade her standing as one of the foremost engineers in Nigeria. It was recognition of a life of service and application to best practices in engineering and management.
Engineering is one of the most diversified disciplines of the modern world with applications across sectors. Omodele Arowolo started in electrical/electronics engineering at the University of Lagos. Since that foundation in 1988, Engr Arowolo has spent time contributing and growing her expertise in aviation and aerospace engineering. Her career has taken in many aspects of aeronautics, aviation safety, regulation, communication, networking and surveillance.
The pursuit of excellence has been the guide for Mrs Arowolo’s post-graduation engagements, from professional service to further studies. She decided to distinguish herself as a manager when she enrolled a few years into her career for the Masters in Business Administration at the University of Ilorin. She then excelled in several other pursuits.
Omodele Arowolo earned a distinction in the Diploma in Aviation Security Aerodrome Operations from the Nigerian College of Aviation Technology, Zaria. She made another distinction as she sought certification of her competence in Air Traffic Safety Electronics Personnel License (ATSEP Licence 2005).
The run of distinctions continued as she earned a post-graduate diploma in Electrical/Electronics Engineering and a further Masters in Electrical Engineering all from Bayero University, Kano. Engineer Arowolo will soon crown these efforts with the doctorate in radio space propagation back at the University of Lagos where the journey started.
Her career trajectory speaks to competence, commitment and continuity. She has served with consistency and dedication at the Nigerian Civil Aviation Authority since 1994 following an initial two years with Deutsche Aerospace, Lagos.
Since March 2011, Eng Arowolo has served as Deputy General Manager, Directorate of Aerodrome and Airspace Management at the Nigerian Civil Aviation Authority. She had been Assistant General Manager, Air Navigation Safety Inspector 1, and Regional Manager, Kano. Other positions have included Assistant then Chief of Communication, Navigation and Surveillance.
She served for three years as Operations/Aviation Security Officer in the Directorate of Safety Regulation and Monitoring of the Federal Ministry of Aviation.
Engineer Arowolo is conscientious. She is an engaged professional who also finds time to network with colleagues in professional groups and to contribute to their development.
She has served in several aviation committees. They include serving as National Coordinator, Aviation System Block Upgrade Methodology Implementation Committee, on the National Performance-Based Navigation Committee and the Technical Advisory Committee to the National Frequency Management Council to World Radio Communication Conference 2015. She was also a member of the Nigerian Civil Aviation Regulations Committee and served in the Development of Aeronautical Telecommunications Manuals of Standards.
True professionals practice under the leading of noblesse oblige; to whom much is given, much is expected. They develop themselves and then offer service to society from the perch of acquired skills and higher competences. They are ethical, responsible, kind and act with compassion and integrity.
Engineer Arowolo belongs to and renders service to no fewer than ten professional associations, local and international. She is a council member of the Council for Registered Engineers in Nigeria (COREN). Her memberships include the Nigerian Society of Engineers, the Nigerian Institute of Management, the Institute of Electrical Electronics Engineering and the Institute of Electrical Engineers, UK.
Her services to engineering extend to developing the field in the area of gender interest. She is a member of the Association of Professional Women Engineers (APWEN), a trustee of Women in Aviation Nigeria and member of the American Society of Women Engineers.
She also belongs to the Women In Aviation International and the National Association of Air Traffic Electronics Personnel.
Mrs Omodele Arowolo, a professional engineers attracts good things everywhere she goes.

See also:  The Real Face Of Nigerian Musician, Lagbaja, Without The Mask

She deserves the cap of fellow of engineering in Nigeria.