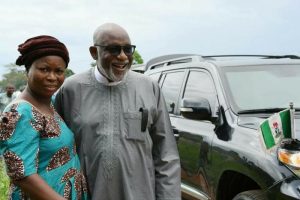 Governor Oluwarotimi Akeredolu of Ondo State made a surprise stopover in front of the shop of an old customer, Mrs. Funmilayo Osunla, popularly called Iya Dare Onigbin at Owena, Igbaraoke in Ifedore local government area, to buy his usual delicacy.

Governor Akeredolu, whose long convoy pulled up at Iya Dare’s stall after a long break, was warmly embraced by the surprised Funmilayo.

Eye witness account described the meeting of the snail seller and the governor in such a circumstance as an event that would for a long time, remain unforgettable in the memory of the former. [myad]