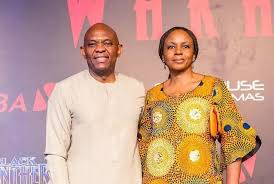 A foremost Nigerian entrepreneur and philanthropist, Tony Elumelu is in celebration mood as his wife turned 50, the golden age.

Elumelu, writing in social media, said:  “My Queen is 50! Join me in saying Happy Birthday to my wife, Dr. Awele Elumelu.”

Elumelu, who is the chairman of the United Bank for Africa (UBA), hailed his wife on his twitter and Facebook page.

The multibillionaire businessman also let his fans know it’s time to show her some love with a beautiful portrait of his ‘Queen’ posted on social media platforms.

Dr. Mrs. Awele Elumelu, who is a general physician, is Trustee of the Tony Elumelu Foundation and a leading voice in Africa’s healthcare sector.

She serves as Chairperson of Avon Healthcare Limited and CEO of Avon Medical Practice, and leads the healthcare investments of African proprietary investment group Heirs Holdings.