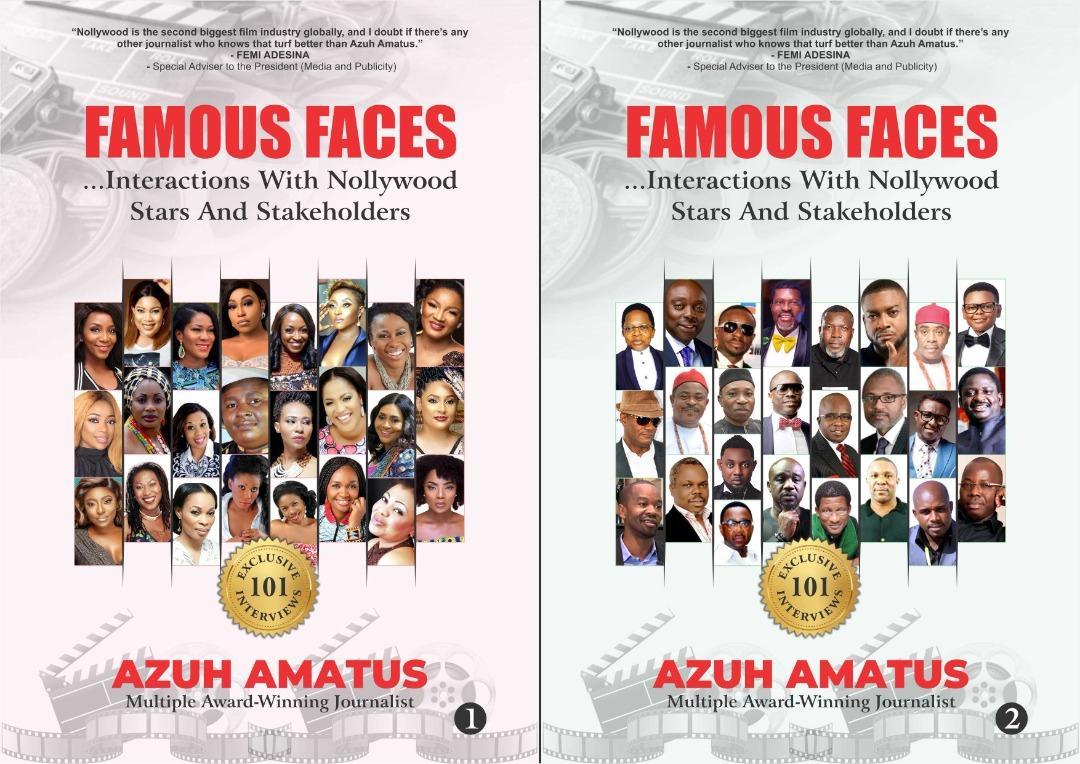 The publisher of leading online newspaper, DAYLIGHT, Azuh Amatus will be unveiling and presenting his two new books, FAMOUS FACES, which are based on interactions with Nollywood Stars and Stakeholders, to the public on Sunday, October 9, 2022.

The 713-page books which are in volumes one and two respectively, vividly and robustly, parade 101 exclusive, incisive and captivating one-on-one interviews and interactions with leading Nollywood stars and stakeholders captured in 101 riveting chapters.

In the foreword written by presidential spokesman and former president of Nigerian Guild of Editors, Mr. Femi Adesina, he said: “Nollywood is the second biggest film industry globally, and I doubt if there’s any other journalist who knows that turf better than Azuh Amatus…Thus, when he speaks about the industry, you need to listen, as he knows his onions. This book will be worth the while of all those who read it. Amatus has done an impressive job,” the former managing director and editor-in-chief of The Sun Newspapers, stated.

Also, in his introduction, Chijioke Azuawusiefe, SJ, PhD, describes both books thus: “Famous Faces provides a treasure trove for those researching Nollywood as well as presents a data mine for original Nollywood contents that might not readily be available otherwise.”

Speaking on why he wrote both books, Azuh disclosed that as a multiple-award winning journalist that has extensively covered Nollywood for over two decades and more, “I felt it’s very important to document and share my Nollywood experience and interactions with our super stars and major stakeholders with Nigerians and indeed, the rest of the world. That burning desire and urge gave birth to Famous Faces after almost a decade of extensive and thorough research works.”

“I must say with all sense of responsibility and modesty that Famous Faces will further enrich and enhance the study, knowledge and general discourse on Nollywood by all those seeking to know more about the phenomenal industry, especially scholars, students, fans and movie buffs within and outside Nigeria. The books will also be very, very useful and germane to all aspiring thespians, movie stars, up and coming actors and others seeking and striving to make it big in the klieg lights of Nollywood, a revered industry, which has no doubt taken the world by storm.”

Azuh, a former Society Editor and Head of Showbiz Desk at The Sun Newspapers, who also edited Entertainment Express and Sunday Express Newspapers respectively, hinted that both books will be on sales nationwide and internationally immediately after the unveiling.

He concluded by urging all tertiary institutions offering courses in theatre arts, creative arts and other related disciplines to have Famous Faces in their libraries, “to further expand and deepen the frontiers of Nollywood.”

The forthcoming evening of glamour, glitz, relaxation and networking holds elaborately at the upscale Colonades Hotels, on 21 Alfred Rewane Road, Ikoyi, Lagos, with the red carpet beginning at 4.PM.