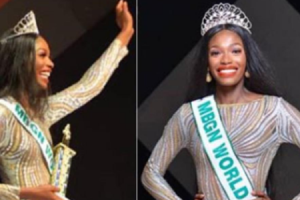 A 21-year-old Nigerian model based in the United States of America, Nyekachi Douglas has been crowned the 2019 Most Beautiful Girl in Nigeria (MBGN) beauty pageant.

Miss Douglas, who represented Rivers State as Miss Rivers, emerged the winner of the 32nd edition of the beauty pageant. She defeated 36 other contestants who keenly competed for the crown on October 11, at the Gabriel Okara Cultural Centre in Yenegoa, Bayelsa.

Miss Douglas was rewarded with a brand new car as the newly crowned Most Beautiful Girl in Nigeria. She will be represent Nigeria at the Miss World 2019 pageantry scheduled to hold at the ExCel London in the United Kingdom, on Saturday, December 14, 2019.

Themed: “True Essence of a Woman,” the 32nd edition of the MBGN also had performances from singer, Seyi Shay and was hosted by MC and comedian, Bovi and Layole Oyatogun.

The event also had a display of the rich Nigerian cultural fashion. The contestants dazzled guests and viewers in their chosen native attires.

The pageant was originally called Miss Universe Nigeria when it started in 1983 and it was later changed to MBGN in 1986.