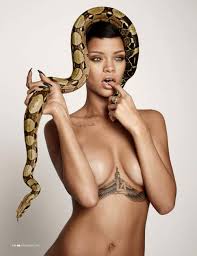 The Standard Authority issued a ruling today, that the poster campaign was “provocative” and “sexually suggestive” and should only appear with placement restrictions to try and make sure that children do not see it.

Rihanna’s advert video was said to have caused a stir earlier this week when she went almost naked while accepting her CFDA Fashion Icon Award and now she is causing some controversy in the UK with the ad for her new perfume, Rogue.

The singer is pictured topless with just a pair of underwear while laying down next to a large bottle of the perfume.

The ruling by the Standard Authority followed a single complaint about the ad featured on elevator doors and the original complaint said the ad was “overly sexual and demeaning to women,” which the ASA did not uphold.[myad]