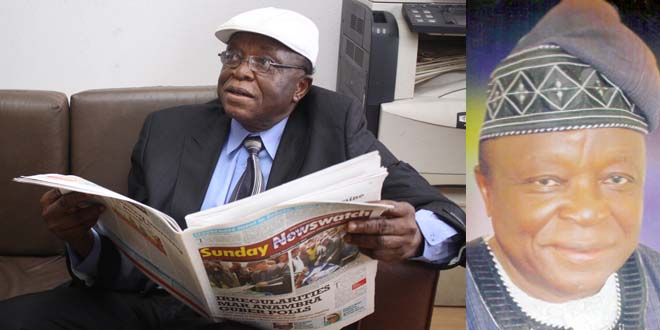 One of the oldest indigenous actors who acted as Village Headmaster on the Nigeria Television Authority series in the early 80’s, Mr. Femi Robinson, 75, is dead even as President Goodluck Jonathan mourned his death which occurred today.

Robinson’s death was announced through a post on his Facebook page credited to his sons, Seun and Wole Robinson. The post read: “This To Notify You That We Lost Our Father Femi Robinson This Morning – Seun & Wole Robinson (Sons).”

The Late Robinson kicked off his acting career by playing the role of Odewale in Ola Rotimi’s ‘The gods are not to blame,’ and afterwards bagged the role of Village Headmaster. He was also a public relations expert and a business and theatre administrator as well as the pioneer Director of Programs of the Ogun State Television (OGTV).

Many of the 80s/90s babies might not be familiar with Femi Robinson or The Village Headmaster series for that matter, but it apparently was one of the biggest shows on TV at the time. It had a huge audience and was popular among people of different age groups.

In his condolence message today, President Jonathan said that Robinson was loved and admired by the public for his edifying role in the famous Nigerian Television Authority (NTA) series, “The Village Headmaster” and that he will be long remembered for his great inventiveness, professionalism and humility.

The President asked members of his family to honour his memory by constantly upholding the values of inter-ethnic harmony, education, civility and proficiency, which he passionately promoted through successful careers as an actor and broadcaster.

The President commiserated with all members of the creative and broadcast industry in Nigeria on the death of the popular actor.

Robinson’s death adds to the number of the cast and crew of the Village Headmaster who have died, joining others like Oba Funsho Adeolu, Chief Segun Olusola and Justus Esiri. [myad]