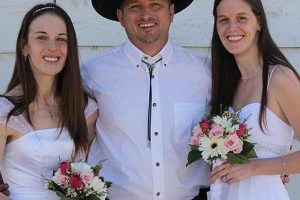 Polygamy is an old tradition in most African countries. Recently, a Nigerian man married two women at the same time in the same church. In the past, white people have strongly condemned polygamous marriage and it is still an offence in the U.S and most European countries. One wonders why the countries who incriminate polygamy, allows marriage between people of same gender.

Polygamy is on the rise and surprisingly, more whites are now interested in it and they have started to practice it. Josh, a white man entered into a four-way relationship with his three girlfriends and all the four lovers are from South Carolina. The question is why are more whites now interested in polygamy? We’ve also seen white twins who share the same boyfriend.

Using multiple marriage licenses by anyone to enter into a legal marriage with more than one person can be regarded as a criminal offence in the U.S. However,a white pastor in the U.S claimed to have married two women because according to him, he loves the two women and therefore, marrying them was the right thing to do.

Psychologists believe that females do better and are more happy by sharing a partner who defends a good territory (with plenty of food, cover and other things they need) than they would be by opting to be the single partner in a bad territory.

Brazilian soccer legend, Ronaldinho, wants to take advantage of the loophole in Brazilian system and marry his 2 girlfriends, Coelho and Souza, at the same time. Under the Brazilian law, polygamy is not allowed. No state in Brazil will issue any person more than one marriage license, but there is a procedure that allows three people to enter into a “civil union”. Therefore, Ronaldinho plans to enter into civil union with his girlfriends and be referring to them as his wives. Report has it that the three of them have been living together since December, this year. [myad]