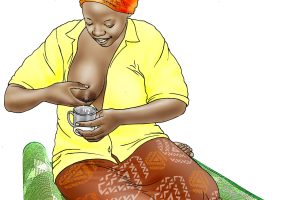 A 24 year old mother-of-two, Rafaela Lamprou has reportedly made a total of $6,000 (about N2.1 Million) from the sale of her excess breast’s milk to men across the globe.

Information reaching us has it that the married woman gave birth to her son, Anjelo seven months ago, and has since then been producing excess milk which she had no room to store.

It was gathered that she has ever since handed out over 502 litres of breast milk to strangers who pay for it, and that so far she had realized $6,000 even as she plans to keep going.

Rafaela Lamprou, who is a hotel worker and who had previously had four-year-old daughter, Hailey, used to also donate her break milk to women who could not produce breast milk for their babies.

She began export the breast milk to the UK and within her home country of Cyprus and still donates her milk to women.

The woman gradually realized the potential commercial value of her breast milk when men were approaching her for it, either as part of their health regime or for fetish reasons.

Now Rafaela, who lives with her 33 year old husband, Alex, and their two kids, sends her milk out to the men for cash on a regular basis.

She said: “I gave birth to my son seven months ago. I had a lot of milk and I thought I needed to do something with it, so I started storing it.

“But it was too much – it was taking up all the chest freezer. It was full. I didn’t know what to do with it.

“So, I asked a couple of mums who were having trouble breast-feeding if they wanted it. I started giving it away.”

Rafaela continued: “I was producing over two litres of milk a day and giving it to women locally. Then I started shipping it to the UK.

“I liked seeing the new mums’ faces when I was able to help them. I then started to get some enquiries from men.

“It started with men who were interested in body building. They say it is good for building muscle mass.

“But then, I started to get enquiries from men with fetishes. Now I breastfeed on demand. I have no idea what they do with it, but they tell me they consume it.”

Rafaela said that at first, it was a ‘bit strange’ giving her breast milk to guys with fetishes – however, she’s okay with it as long as it doesn’t go any further in terms of asking her to show any part of her body, explaining that she’s “open minded.”

“I am not sure how much longer I will carry on for,” she continued. “I had no idea with my first baby that you could do this kind of thing. But now it is quite addictive.

“My husband is so supportive of me. He is really cool about it. He is happy as long as I am.”