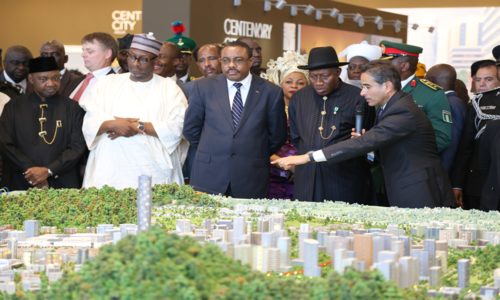 The Minister of Nigeria Federal Capital Territory, Senator Bala Mohammed has said that the sum of N2.976 Trillion (18.6 billion US Dollars) has been mopped up to develop the 1,200 hectares of land for the Centinary City.
Speaking at the groundbreaking ceremony of the city by President Goodluck Jonathan at Gosa, airport road on Tuesday, Senator Bala said that a total of N1.2 billion had been paid as 100 percent compensation for economic trees of the original inhabitants as well as structures of some Non natives situated on the site.
According to him, 20 percent of the plot for the project has been earmarked for residential houses while 80 percent is for mixed use and commercial purposes.
The city, he said, will have Free Trade Zone, Duty Free Regime, Tax Holidays and Pioneer Status among other things, to facilitate recovery of the investment in the city.
“This will also facilitate the creation of 55, 000 well paying jobs for Nigerians.”
Former Nigerian Head of State and Chairman of the Board of the Centenary City PLC, General Abdulsalami Abubakar had disclosed that the city will have 250,000 construction workers and over half a million visitors daily.
According to him, the city development is in three phases, even as the company’s Executive Director, Mohammed Al-Abbar said that Major the cities will grow about 18% while developing cities will grow at a bigger rate.
He said that the city will deploy the best technology, create a Movement in all economic sectors.
He said that Eagle Hills is committed to the development of the centenary city with about $80B, adding that a similar project, the  Down Town Dubai which the company developed attracts 80 million visitors.
Al-Abbar said that at about 1300 hectors, the city is one of the largest such cities to be built in the world, adding that the technology will be deployed while education and health facilities will be emphasized with the city being 50 percent green.
“We will have wonderful amusement parks, golf course, while also emphasizing local cultural entertainment integrated into the city’s development.”
He said that the Eagle Hills is very passionate about the project and that it will ensure high quality in the maintenance of all assets in the city.
He said that the city will host about 500,000 visitors daily and ensure human development of all sorts, saying that the project is being promoted by the Centenary City PLC, with Eagle Hills developing the city at no cost to the federal government.
Performing the groundbreaking ceremony, President Jonathan said the Centenary City is a symbol of hope and national unity.
He assured investors that they will not be disappointed for patronizing the project.
President Jonathan said that the centenary city remains Nigeria’s dream as the country move into its limitless opportunity
“It is city of hope and elegance” as well as “a symbol of our unity” President Jonathan said that there is no greater show of resolve by Nigeria than to preserve its legacies.
Earlier, the Secretary to the Government of the Federation, Senator Anyim Pius Anyim, confirmed to the President that 22 prospective investors among them, Mohammed Al Abbar, Chairman of EMAAR Group, under the name of Centenary City Plc. He said that they formed a coalition to ensure that the city becomes a reality in record time, adding that EMAAR Properties is the largest construction and development company in the United Arab Emirate which is responsible for the development of Burj Khalifa, the tallest artificial structure in the world.
[myad]

See also:  ICAN Advocates Diversified, Resilient Economy To Get Nigeria Out Of Doldrums