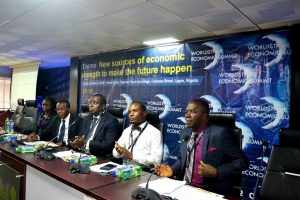 An associate Professor in the department of Economic, University of Lagos, Dr. Babatunde Wasiu Adeoye has made it clear that agribusiness remains the best bet for the growth of Nigeria’s economy, away from oil.

Adeoye, who delivered a keynote address today, Tuesday at the second world Stage Economic Summit held in Lagos said: “expansion and massive development in Agribusiness through improvement in the agricultural value chain remains a viable new source of economic strength to make the future happen.

“This is because it has the ability to reduce massive importation of such product thereby reducing the demand gap. More also, there will be rapid export of such products thereby increasing foreign earnings. Finally, this will create massive employment opportunities for the people.

The lecturer noted that in the new world, there are sources of generating funds that are beyond the reach of the country, adding: “ there are new sources of economic strength for other countries which might not be obtainable for Nigeria considering its structure and the advantage it has.

Such sources, he said, are digital ecosystems to drive future growth; the place of Artificial Intelligence in future growth and Blockchain Technology.

He said that besides agribusiness, attention should also be placed on tourism, as this will massively spur growth as well as increase foreign earnings and job creation.

He said that in looking for new sources of income, attention must be made to first understand structure of the economy, its strengths and peculiarities.

He warned that Nigeria’s continuous dependent on oil as a major stay of the economy is  like walking on a gold mine waiting to explode.

Earlier in his welcome address, the President and Chief Executive Officer of Worldstage Limited, Segun Adeleye said that the second Summit is coming at a time when attention is majorly focused on politics, as the country is getting ready for the general election in the first quarter of 2019.

“Economic forecasts from the World’s Leading Economists by Focus-Economics have indicated that political uncertainty will be high going into the 2019 election and that politics will likely put economic reforms on the backburner and delay the 2019 budget.

“Since the WorldStage Economic Summit 2017 here with the theme: ‘Transforming Business and Economy Through Innovation, Nigeria’s economic recovery had wobbled after GDP growth dropped notably in second quarter.

“For the first time since the exit from recession, growth was driven by the non-oil sector which grew by 2.05%, the strongest growth since the first quarter of 2015.

“However, despite higher oil prices, international reserves dropped for a third consecutive month in September as the government defends Nigerian assets against capital outflows.

“Moreover, weak tax collection combined with record spending plans for this year, have forced the government to turn to international markets for cash, adding to the country’s debt burden.

“With the Central Bank of Nigeria’s Monetary Policy Committee’s recent warning about possible slipping back to recession, the International Monetary Fund (IMF) has cut the 2018 growth projections from 2.1 percent to 1.9 percent on the back of poor economic performance.

“Conscious of the growing population of Nigeria with about 50 per cent youth unemployment rate as a wakeup call, the last two editions of the WorldStage Economic Summit (2016 and 2017) looked at Addressing the unemployment crisis in Nigeria; and Transforming Business and Economy Through Innovation respectively.

“Going forward, the WorldStage Economic Summit 2018 with theme: ‘New sources of economic strength to make the future happen’ was inspired to bring to the consciousness of stakeholders the need to be on the driver’s seat of the economy and transit to a future of knowledge, competitiveness and prosperity.

“Our thinking is that the policy makers and the private sector should be looking at how to match the potential in the economy with new development around the world that focuses on the shape of things to come.

“Nigeria has never at any particular period deliberately developed  any area of her economic strength, rather it dumped the agriculture where it had comparative advantage when oil was discovered in the 1960(s) and since then economic development has been approached haphazardly.

“But the dynamic nature of global interest could be a blessing if the country can now identify and run with the right future to fast-track industrialization, just as the telecommunications sector broke all record of growth in the last decade.”

Adeleye said that the Summit was aimed at exploring how Nigeria will not be left behind in the fourth industrial revolution with focus on economic strength through the sub themes, Digital ecosystems to drive future growth; Developing the Agribusiness; The Blue Economy Option; The place of Artificial Intelligence in future growth; Blockchain Technology and the future; Science, Technology, Engineering and Mathematics (STEM) Education in Nigeria.