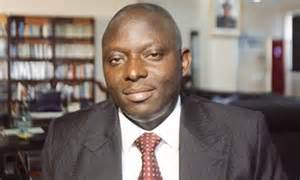 All Progressives Congress (APC) Presidential Campaign Organization which recently accused the Nigerian Maritime Administration & Safety Agency (NIMASA). Of using Nigeria financial resources to fund the campaign of the Presidential candidate of Peoples Democratic Party (PDP), the incumbent President Goodluck Jonathan, is not yet done with the Agency.
In a statement today in Abuja, Director of the APC Presidential Campaign Organisation, Garba Shehu challenged the Federal Government and the NIMASA to tell Nigerians what happened to the $800 Million and N50 Billion of the Cabotage Vessel Finance Fund (CVFF) which the agency was in control of until recently when the “Fund” became unaccounted for.
The “Fund,” according to Garba Shehu, was money derived as 2 percent surcharge for all Contracts under the Cabotage regime which came into force in 2004 by virtue of the Coastal and Inland Shipping Act (Cabotage) 2003.
He added that the Cabotage Act which was closely modeled after the United States of America’s Jones Act 1938 was to help develop the capacity and participation of indigenous ship owners in coastal inland trade which was largely dominated by foreigners.
He alleged that up to date the objective for which it was established is yet to be achieved “as seen in the depleted Indigenous Ship Owners Registry, the mass unemployed Nigerian Seafarers, and the prevalence of foreign interest in the Nigerian coastal waters.
“Instead, the Cabotage regime breeds corruption, ranging from request of inducement and gratification from foreign ship owners through their agents for waivers processing by NIMASA and approval of the Federal Ministry of Transport by some top staff of the agency to the disappearance of the CVFF Fund meant to be accessed by the Nigerian ship owners.
“The website of the Nigerian Ship Owners Association (NISA) shows that 90% of its 78 registered ship owners are on the brink of extinction as they are submerged in debts without the necessary CVFF to access.”
Garba Shehu made it clear that Nigerians deserve to know what happened to the money accumulated under the CVFF Fund amounting to some $800 Million US Dollars and N50 billion respectively. He wanted the agency to make public the list containing names of beneficiaries and amounts from the “Fund” if any.
He said that time is of the essence in publishing the list following fears that the money may have been diverted for other purposes like campaign for the PDP presidential candidate, and the submission of a request from the Director General of the agency to proceed on a six months leave of absence from the agency. [myad]