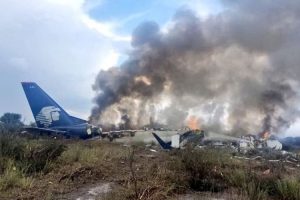 No fewer than 14 people are dead after a plane which left Las Vegas heading to Monterrey, Mexico, crashed in northern Mexico, late yesterday, Sunday.

Fernando Orta of Coahuila state’s emergency services department said that the plane was located 129 miles northwest of Monclova. It went missing about 90 minutes after departing Vegas on May 5.

“The land is rather mountainous … so they’re going to take a while longer to arrive,” Orta said, adding that officials have not yet arrived on the scene of the crash.

The passengers, who were between the ages of 19 and 57, were reportedly in Las Vegas to watch the boxers Canelo Alvarez and Daniel Jacobs fight. It is believed that the victims are Mexican nationals.

Though, the wreckage of the plane has been found, according to a government official where 11 passengers and three crew members died, Coahuila Governor, Miguel Riquelme however said today, May 6 that a search operation for the plane was ordered, even as he admitted: “we still do not know what happened.”

According to CNN Wire reports, the plane model was the Canadair Challenger 600, and it has a total capacity of up to 20 people.

FlightAware said the plane went to 37,000 feet for a while, went up and down before climbing to 40,000 feet and was not tracked any longer. Report confirmed that a strong storm was in the area.

A Radio Centro correspondent stated: “The Secretariat of Public Security of Coahuila and authorities of Nuevo Leon have begun searches for the private Jet Bombardier Challenger 601 plane, registration N601VH, that flew from Las Vegas to Monterrey, with which contact was lost on Sunday afternoon.”