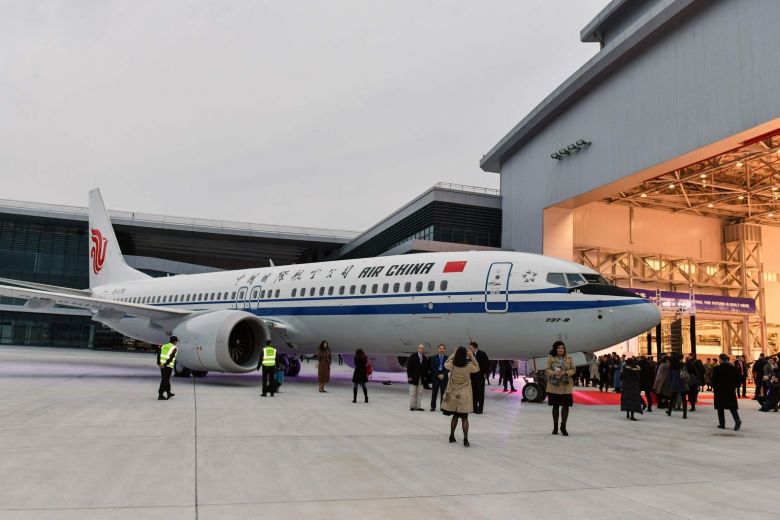 The crash of Ethiopian Airlines Flight 302 on Sunday, Mrach 10 which killed all 157 people on board, has prompted the United Kingdom, China and other countries of the world to ban their fleets even as Boeing investigates whether there’s a link between Ethiopia’s disaster and the crash of Lion Air Flight 610, which plunged into the Java Sea 12 minutes after takeoff in October 2018.

China’s aviation authority said yesterday, Monday that it had issued a notice to ground all Boeing 737 Max 8 planes used by domestic airlines in response to Sunday’s crash.
A statement posted to the Civil Aviation Administration of China’s website said similarities between the Ethiopian Airlines crash and the Lion Air crash had caused concern over the Boeing aircraft.

“Safety is our number one priority and we are taking every measure to fully understand all aspects of this accident, working closely with the investigating team and all regulatory authorities involved,” a representative for Boeing China told Business Insider.
“The investigation is in its early stages, but at this point, based on the information available, we do not have any basis to issue new guidance to operators.”

The UK Civil Aviation Authority also announced that it has been closely monitoring the situation, saying: “as we do not currently have sufficient information from the flight data recorder we have, as a precautionary measure, issued instructions to stop any commercial passenger flights from any operator arriving, departing or overlfying UK airspace,” a spokesperson said.
“We remain in close contact with the European Safety Agency (EASA) and industry regulators globally.

“This is a temporary suspension while we wait for more information to review the safety risks of continued operations of the Boeing 737 MAX.”
Also, Indonesia’s air-safety regulator had said that it would halt all flights involving the planes from today, Tuesday even as Singapore suspended all Boeing 737 Max aircraft flying in and out of Singapore.

Similarly, Oman’s civil aviation authority said Tuesday morning that its suspending the 737 MAX 8 into and out of all airports in the country until further notice.
This was even as Mexican airline, AeroMexico said it’s suspending six Boeing 737 Max 8 planes.
The company said that it trusts “fully” in the safety of its fleet but added that the grounding has been ordered to ensure “the safety of its operations and the peace of mind of its customers.”
It says other planes will take over the flights usually flown by its Max 8 jets.

See also:  2023 Presidency: Atiku May Dump PDP As The Party Zoned Him Out

Brazil’s Gol Airlines has also suspended 121 Boeing 737 Max 8 aircraft. The company said in a press release Monday since it began using the 737 Max 8 in June 2018, and their aircraft have made nearly 3,000 flights with “total security and efficiency.”

Also, Norwegian air, whose fleet is heavily comprised of 737 MAX 8’s, also said Tuesday it would ground the plane, according to the Norwegian news outlet E24.

This was even as Cayman Airways said that it would ground its two 737 Max 8 aircraft until more information was received.

“While the cause of this sad loss is undetermined at this time, we stand by our commitment to putting the safety of our passengers and crew first by maintaining complete and undoubtable safe operations,” Cayman Airways’ president and CEO, Fabian Whorms, said in a statement.

“We offer our valued customers our continued assurance that all prudent and necessary actions required for the safe operation of our Max 8’s will be accomplished before the aircraft are returned to service,” he said, adding that the move would require the airline to make some minor schedule and capacity changes.

The South African airline, Comair also said that it was grounding the 737 Max 8 out of an abundance of caution.

“Comair has decided to remove its 737 MAX 8 from its flight schedule, although neither regulatory authorities nor the manufacturer has required it to do so,” Wrenelle Stander, executive director of Comair’s airline division, said in a press release.

“While Comair has done extensive preparatory work prior to the introduction of the first 737 MAX 8 into its fleet and remains confident in the inherent safety of the aircraft, it has decided temporarily not to schedule the aircraft while it consults with other operators, Boeing and technical experts,” it continued.

She said that the airline hasn’t found any problems, but is voluntarily grounding Boeing 737 Max 8s in a response to customer concerns.