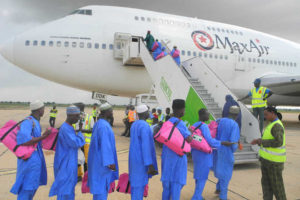 In a statement today, September 8, Captain Ibrahim Dilli admitted that there was minor landing challenge as a result of heavy torrential rain and wind but that the pilots manneauvered the aircraft to safe landing.

“The aircraft did not crash nor skid off the runway. Aircraft was taxied to the airport terminal and passengers disembarked without any problems.

“All passengers and crew are safe and sound,” Captain Ibrahim Dilli emphasized.

He said that all reports of the “minor incident” have been filed and that officials of the Nigerian Civil Aviation Authority (NCAA) and Accident Investigation Bureau (AIB) have inspected both the aircraft and the runway “and are satisfied.”

The Director of Flight Operations gave assurance that Max Air Limited is fully committed to providing safe and efficient services within the confines of the Nigeria and International aviation regulations.