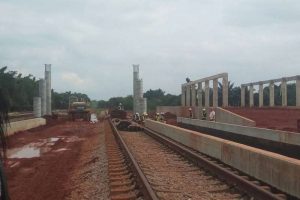 Senate Committee on Land Transport has commended President Muhammadu Buhari for resuscitating the moribund Ajaokuta-Itape-Warri rail line which was abandoned for over 35 years by successive governments.

Chairman of the committee, who represents Lagos East Senatorial District in the Upper chamber of the National Assembly, Gbenga Ashafa made the commendation yesterday, Tuesday when he led members of the committee on inspector tour of the site.

Senator Gbenga Ashafa could not hold his joy on seeing the progress made on the project, saying: ”I am excited by the fact that after many years of lack of commitment by successive administrations, and failure by these administrations to revive this all important rail route, the Government of President Buhari has finally been able to do the needful.

“You will recall that from the very beginning of our assignment in 2015, I assured you of the commitment of our committee to ensure that we work collaboratively with the executive to ensure that we deliver to the Nigerian people a functional railway system that cuts across the length and breadth of the country.

“This we have done through the guarantee of appropriation for critical infrastructure as well as effective monitoring of expenditure as at when due. We have disagreed on processes, checked and balanced ourselves as should be, but most importantly our collective resolve to see a Nigeria that works, a railway that functions and an administration that succeeds far outweighed our differences politically and institutionally.

“This remains our commitment. In the past three years of this administration, we have been able to work together (the Executive and this committee), to deliver to Nigerians the Port-Harcourt to Owerri line, the Abuja to Kaduna Standard gauge line, a substantial rehabilitation of the entire narrow gauge rail infrastructure which now includes the Ajaokuta – Itakpe – Warri line.

See also:  Buhari Warns Those Resisting IPPI, Says Their Salaries Will Be Stopped

“We also have in the works for delivery very soon the Lagos to Ibadan Standard gauge line.”

The Federal Ministry of Transportation represented by the Government Inspector of Railways, Managing Director of Nigerian Railway Corporation, Engineer A.B Yusuf, represented by the Deputy Director of Rail Mobilzation and Rehabilitation in the Federal Ministry of Transportation, Engineer B Kehinde as well as the representatives of Julius Berger Nigeria and China Civil Engineering Construction Corporation Ltd CCECC.

At the end of the inspection by the committee which took them through Sector seven in Agbor, Sector 8 in Abraka and the Warri terminal point in Delta State, Ashafa commended and acknowledged the effort of the Minister of Transportation, Rotimi Amaechi and all those who played a role in ensuring that the Ajaokuta- Itakpe-Warri rail line becomes operational.

He advised the contractor, Messrs. CCECC to continue to maintain a high standard of operation and to deliver on all outstanding projects, particularly the Lagos to Ibadan Standard gauge railway timely.