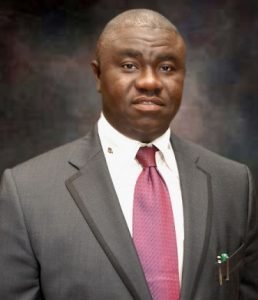 Minister of State for Budget and National Planning, Prince Clem Ikanade Agba has unveiled the eleven distinct areas which President Muhammadu Buhari’s government will focus attention in the second term of another four years.

The minister, who spoke today, September 9 in an audience with leaders of Edo People’s Movement (EPM) in his office in Abuja, said that the priority would be on achieving agriculture and food security; ensuring energy sufficiency in both power and petroleum products; and improving the nation’s transport and development of infrastructure.

Others are driving industrialization; improving the health, education and productivity of Nigerians; ensuring social inclusion and reduction of poverty; fighting  corruption and improving governance; and, generally improving security for all.

According to Agba, Vision 2020, which rests on six interwoven pillars, including good governance and efficient State, skilled human capital, vibrant private sector and world class physical infrastructure, among others, would come to an end next year about the same time that the Economic Recovery and Growth Plan (ERGP) would end.

He underscored, in particular, the functionality of the ERGP in helping Nigeria to quickly exit recession in the last quarter of 2017.

ERGP is a Medium Term Plan for 2017 to 2020, developed by the Muhammadu Buhari administration, to bring about medium term all-round development initiative focused on restoring growth, investing in people and building a globally competitive economy.

A statement by the Minister’s Special Assistant on Media, Sufuyan Ojeifo, quoted him to have said that “following the fall in crude oil prices to as low as $28 per barrel and  the issues we had around production, Nigerian, of course, went into recession. So the ERGP had to be put in place in order to take Nigeria out of recession; and, I am glad to inform you that for the ninth consecutive quarters, we have experienced growth in the economy.

Agba told his visitors that he shunned celebration over his appointment to enable him start work immediately, pointing out that “We had meetings around the Medium Term Expenditure Framework (MTEF) and we are still working on it and the 2020 budget.

“We are trying to change our budget cycle to make it January to December cycle.  And, in order to be able to achieve that, the National Assembly had clearly told us that if we could present the budget at least by the end of September; or, say first week of October, they would be able to pass the budget in December.

“So, that is what we are working towards; that is our goal- to ensure that we change that budget cycle. But immediately we do that, we would start work on the succession plan that I talked about.”

Other members of the EPM leaders who visited the minister are co-conveners, Hon. Samson Osagie and Barrister Henry Idahagbon and others.