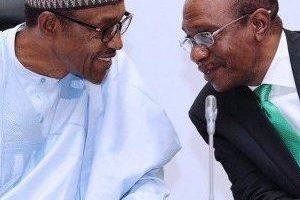 There are strong indications that against all odds, the Governor of the Central Bank of Nigeria (CBN), Godwin Emefiele, will return shortly for a second term in office, when he might have ended his first tenure in a couple of months from now.

The apex bank’s chief, who has been facing a lot of stiff opposition from top Nigerians that were affected by the bank’s reformation policies, himself, announced today, Thursday, at the ongoing Association of Assets Custodians of Nigeria (AACN) conference in London, that he is returning for second term.

The 57-year-old banker, who has over the years, raised the key interest rate to a record high to contain price growth and strengthen the naira, despite sluggish growth, is known to be favoured by President Muhammadu Buhari who is very passionate about boosting local production and strengthening the naira.

And the President has just forwarded the name of Emefiele to the Senate for confirmation as the apex bank Governor for a second term of another five years.

A letter read by the Senate President, Dr.  Bukola Saraki at the plenary, stated that the President was seeking for the confirmation for the re-appointment of Godwin Emefeile as the CBN governor for the last term.

It is on record that Emefiele’s defiant stance against multiple calls to devalue the naira and restriction on importation of 40 items from buying foreign exchange has endeared him to the President.

Prior to his appointment as the CBN Governor on June 3, 2014, Emefiele was the Group Managing Director/Chief Executive Officer of Zenith Bank Plc, the post, he assumed after spending over 26 years in commercial banking.

He had won the best graduating student award when, in 1986, he obtained a Master’s Degree (MBA) in Finance from the University of Nigeria, Nsukka, the same school, where he studied banking and finance and graduated with a second class upper division, two years earlier.

He later had executive studies at Stanford University, Harvard University and Wharton School of Business.

Under Emefiele’s leadership, the CBN has recorded many feats, notably attributed to his uncanny ability to think outside the box when faced with the most difficult situation.

At a time when Nigeria was at a crossroads, Emefiele as the CBN governor drove the apex bank to rise to the occasion to bring the economy out of crisis and forestalled another one.

He held forth on the economy, when there was a lacuna on the fiscal side, as a result of president’s delay in the appointment of his ministers, particularly the finance minister, for six months.

This is the first time since Nigeria returned to democracy that a central bank governor will serve more than one term in office, a testament to his good relationship with the president, according to people close the two parties.