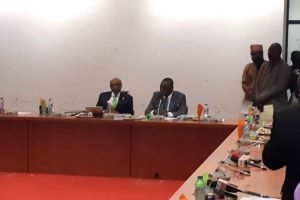 The Senate Committee on Banking, Insurance and Other Financial Institutions has expressed satisfaction with the Central Bank of Nigeria (CBN) and its Governor, Godwin Emefiele, for contributing immensely to the stability of the Nigerian economy, in spite of the recession the country witnessed in 2016.

The Chairman of the committee, Senator Rafiu Ibrahim Adebayo spoke today, Wednesday, during the committee’s screening of Emefiele for a second term following his appointment by President Muhammadu Buhari for a second and final term in office as Governor of the Central Bank of Nigeria.

Senator Adebayo, while grilling the nominee on the state of Nigeria’s economy, said that the reappointment of Emefiele was an indication that the President recognized the Bank’s contribution to the health and stability of the economy.

Adebayo, who also dismissed recent allegations of fraudulent activities in the CBN through a leaked audio tape, expressed satisfaction with the presentation of Emefiele even as he charged the CBN Governor and his team of Board and Monetary Policy Committee members not to be deterred but rather redouble their efforts at ensuring the promotion of a sound and stable economy

Other senators who took turns to speak also commended the CBN Governor on the successful reforms carried out during his first tenure, and called for greater improvement in the areas of foreign exchange management, development finance and access to credit among others. They also sought clarification on the issue of foreign exchange windows

In his response to the questions, Emefiele said that more needed to be done to get Nigeria to the desired heights, even as he promised that the impact of the Bank’s development finance interventions would become very visible within the next two years.

Alluding to the pace of development in some Asian countries that were Nigeria’s peers at independence in 1960, Emefiele promised to implement the Bank’s policies for the betterment of the Nigerian people, who are at the heart of the Bank’s vision of a people-centred Central Bank.

The screening exercise followed the call by the President of the Senate, Senator Bukola Saraki, to the committee at the plenary on Tuesday to carry out the screening and report back to the Senate within one week.

Emefiele was appointed as CBN Governor on June 2, 2014, is due to end his first tenure on June 2, this year.

President Muhammadu Buhari last week transmitted a letter to the Senate requesting that Mr. Emefiele be confirmed as CBN Governor for a second and final term of five years.

Meanwhile, it is expected that the Senate will confirm the nomination of Mr. Godwin Emefiele as the Governor, Central Bank of Nigeria next week after receiving the report of the Committee on Banking, Insurance and Other Financial Institutions.