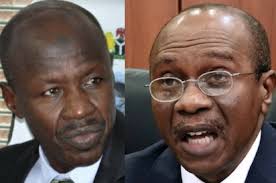 With the first crucial meeting held between officials of the Central Bank of Nigeria (CBN) and that of the Economic and Financial Crimes Commission (EFCC) today, Thursday in Abuja, there are indications that financial crime offenders may face ban from opening and operating bank accounts anywhere in Nigeria.

The decision to bar financial crime offenders was believed to have taken its strength from the recent resolution of the CBN under the auspices of the Bankers’ Committee, which said that “any individual or corporate body found to complicit in economic crime or attempts to circumvent economic laws and regulations of the country may be barred from operating a bank account in any bank in Nigeria.”

Information coming out of the CBN and ÉFCC meeting, which was held at the Central Bank headquarters in Abuja, said that it was aimed at strengthening the country’s fight against economic crimes.

The meeting was said to be an opportunity for the two entities to share experiences and peculiar challenges in the fight against economic related crimes.

It was gathered that the two agencies adopted strategies aimed at curtailing the unwholesome activities of economic saboteurs which include smuggling of commodities like rice, textile materials, fertilizer, wheat and other items on the prohibition list for accessing foreign exchange through official window, as well as tracking illicit financial flows.

Other areas which the two agencies are collaborating include anti-money laundry and the monitoring of politically exposed persons in the country.

The inter-agency meeting was chaired by the Director, Governors’ Department of the CBN, Jeremiah Abue.

The two agencies were said to have agreed to improve the level of information-sharing and surveillance of the financial sector.