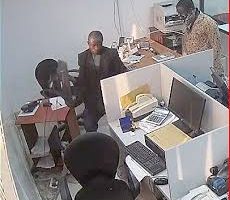 The Kaduna State Internal Revenue Service (KDIRS) has sealed the premises of Keystone Bank and First City Monument Bank (FCMB) in Kaduna over alleged unpaid taxes.
The Executive Chairman of the Service, Dr. Zaid Abubakar told newsmen today, January 14 in Kaduna that the banks allegedly owed the state government to the tune of N294.85 million.
Abubakar said that the amount accumulated from unpaid Pay-As-You-Earn (PAYE) and withholding tax since 2007.
According to him, Keystone Bank owed unpaid taxes amounting to N222.8 million between 2007 and 2018, while FCMB owed more than N72 million from 2007 to 2016.
“When you put these together, the total liabilities amounted to N294.85 million, which we want them to pay.
“We carried out the tax audit along with the banks officials, sent them our report, assessment and demand notices.
“KDIRS also wrote to the management of the banks several times, but they refused to come for reconciliation and failed to respond to our demand notices.
“Therefore, we had no option but to seal off the branches according to relevant tax laws.”
Also speaking, KDIRS’ Head of Enforcement Unit, Ado Garba, said that sealing the banks’ premises was to ensure compliance to relevant tax laws.
Ado said that the branches would be reopened as soon as they pay the taxes.
According to him, the affected backs are equally expected to pay N250, 000 each, being the cost incurred to enforce the law.
The KDIRS Secretary and Legal Adviser, Frances Kozah, said that the banks had 14-day window to remit all the tax liabilities, adding that if the failed to comply, the agency would take the next step to ensure compliance.
He said that part of the resolution of KDIRS in 2020 was to ensure full implementation of tax laws in the state.
Source: NAN.