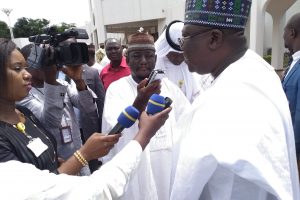 The new President of the Senate has made it clear that the 9th National Assembly will henceforth pass annual national budget within three months it is presented by the President.

He said: “we have campaigned with that and it’s something both of us in the National Assembly have bought into – that we will pass the budget within three months by the grace of God.”

Speaking to news men today, June 14 at the Presidential Villa, Abuja, the Senate President said however that it takes two sides of government to pass the budget in good time and expressed the confidence that the executive side of the government would  like to present the budget before the National Assembly in good time, “say in September or early October, and by the grace of God, we in the National Assembly will ensure that we carry out the budget defence and do the remaining parts of the processes and before we leave for Christmas break, the budget would have been passed and Mr. President would have gotten the budget before him to signed and assent.

Senator Ahmed Lawan said that it is the desire of the members of the National Assembly that every minister, every chief executive officer of every agency to defend the budget of his agency or her agency before going out of the country.

“I believe that nobody would take pleasure in wasting the time of this administration. We are in a hurry; we are thirsty to perform. We want to support Mr. President. We want to see Mr. President achieve those dreams that he has and we are going to work full course and full time to ensure that we give him the maximum support that he requires.”