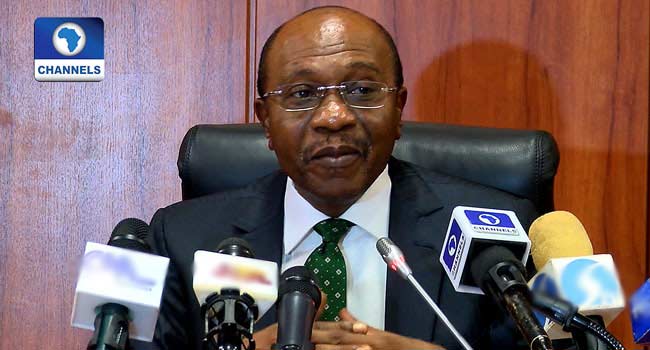 Governor of the Central Bank of Nigeria (CBN), Godwin Emefiele has said that with the redesign and reissue of Naira note the apex bank will insist that cashless economy takes root nationwide.
“We will restrict the volume of cash that people can withdraw over the counter.
“If you need to withdraw large volume of cash, you will fill uncountable forms. We will take your data, whether it is your BVN, your NIN so that enforcement agencies like EFCC or ICPC can follow you and be sure that you are taking that money for good purpose.”
Emefiele, who answered questions from newsmen shortly after the unveiling of the new notes by President Muhammadu Buhari at the Presidential villa today, November 23, said that many countries, especially the advanced ones have far gone in cashless system.
“In other countries, you will find, say in the US, to withdraw $10,000 from the counter, you will be interrogated. You will fill numerous forms. They will even track the use of that $10,000 cash that you are withdrawing.
“Or you want to withdraw £10,000 from the counter, they will refuse and if you insist, then you will fill forms.
“The problems we have had in the past is that we say this is a cash economy. There is no economy that is inbuilt thinking that it has to be cash economy.
“The world has moved away from predominantly cash to cashless economy. And I think Nigeria and the Central Bank of Nigeria is prepared at this time to move towards a cashless economy.”
Emefiele insisted that we have to work as a country, adding that Nigeria is the biggest country both in population and economy in Africa and “we have to ensure that we do things the right way, that also positions us as leader in Africa and one of the leading countries in the world.
“We must do things right and I think it would start from today.”
On the new notes, the CBN Governor assured that they cannot be counterfeited because of the security features in them, emphasising that nobody can counterfeit them.
“What you could only find will be people making photocopy of these notes. If you follow due process to check the authenticity of a currency, take them through the UV light, you will find that this currency cannot be counterfeited. “The best you will find is photocopies. What I am trying to say is that to reduce that incidence of counterfeiting or photocopying, that is why we are saying the CBN must now, without waiting every five to eight years, redesign and reissue these notes. So that those who think they can take advantage of the system by counterfeiting will know that the game is over for them.”
He regretted that before now, out of N3.23 trillion in circulation, N2.72 trillion has been outside the bank vault.
“And we will insist that those N2.72 trillion must return to the bank vault by January 31st, 2023.
“If you chose to hold it after January 31st, 2023 it will become useless in your hand. That’s all.”