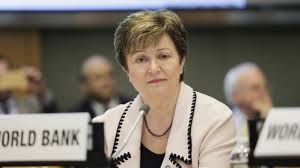 The International Monetary Fund (IMF) has raised an alarm that the global economy has moved into a recession and that developing countries would be more hit.

“It is clear that we have entered a recession” that will be worse than in 2009 following the global financial crisis, Mrs. Georgieva said during an online media briefing.

She put the estimated financial intervention needed by emerging markets at this time at $2.5 trillion.

Georgieva nevertheless said “we believe this is on the lower end.”

More than 80 nations have approached the IMF for emergency aid.