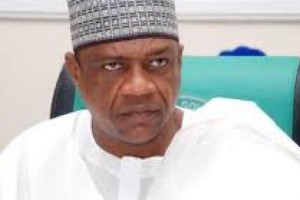 The Speaker of the Yobe State House of Assembly, Alhaji Adamu Dala-Dogo has assured the governor of the state, Alhaji Ibrahim Gaidam that the  N69.3 billion budget for the 2017 will receive accelerated passage in the interest of the people.
“I also want to assure you that as anti-corruption ambassadors, the house will pass the bill without padding, we are not going to pad it.”
The speaker responding to the governor’s speech as he presented the budget to the House yesterday, Thursdayo.
The budget, tagged: “Budget of Consolidation and Self reliance,” represents N19.5 billion or 22 per cent below the 2016 budget of N88.9 billion.
Governor Gaidam said that the budget was based on the economic realities of the country and the state.
He said the state was expecting N35.3 billion from statutory allocation, N3.8 billion from Internally Generated Revenue and N7.4 billion from Value Added Tax.
Gaidam said: “Government intends to spend the sum of N27.407 billion or 39.5 per cent to cater for capital expenditure, while the sum of N41.9 billion or 60.5 per cent is earmarked for recurrent expenditure.”
He said that the state Ministry of Education has the highest sectoral allocation of N17.7 billion followed by the Ministry of Works with N10.7 billion and Ministry of Finance, N10.3 billion.
Reviewing the 2016 budget, the governor said the sum of N49.8 billion was the actual receipt of revenue by government out of the N88.9 billion budget.
Gaidam appealed to the Assembly to expedite action on the passage of the budget so as to improve the lives of the people. [myad]