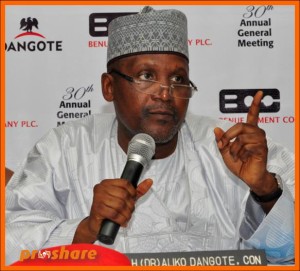 Africa’s richest person and the continent’s top donor Aliko Dangote has announced that he is upping his philanthropic works across Africa, starting from his home country Nigeria.
A statement from the Group said that Dangote has alreadu made whooping donations of over N30 Billion across Africa. “Africans must begin to take responsibilities by shaping the condition of its people,” the kindest man in Africa was reported to have said.
The statement explained that just in two years, the Dangote Group through its Foundation, churnned out about N30 billion in humanitarian gesture.
“This is includes the Dangote Academy that is worth about a N1billion, through which manpower is developed across various disciplines.
“Only last month, the Dangote cement, Ibese, through the Dangote Foundation, announced a scholarship for some Yewa community 50 students of various secondary and tertiary institutions.
“The Group had donated $500,000 to victims of explosion in Republic of Congo.
“Dangote Foundation also contributed a staggering $2million to flood victims in Pakistan and N120million to cushion the effect of famine in Niger Republic.”
The statement recalled that two years ago, Dangote made a staggering donation of N2.5billion to cushion the effect of flooding in Nigeria, making that the single highest donation by a private body in the history of Nigeria.
“Dangote also donated N430million to flood victims, unemployed youths and women in Kogi State in the same year. Three years back, the Dangote Foundation gave out about a billion naira for the economic empowerment of women in Kano State.
“Only recently, the Foundation donated N540 million to vulnerable women as a result of insurgency in the North East of Nigeria.
“The group had pumped over N1billion into the rehabilitation of some Nigerian universities, as part of its contribution to the educational sector.
“Two months ago, the Dangote Foundation donated 12 trailer-load of relief items worth N40million to support the government in bringing succour to victims of communual clash that displaced people.
“The Group had also donated N100million to victims of Lagos flooding, another N100million to those in Sokoto and N60million to victims of flooding in Oyo State, two years back.”
The statement quoted Alhaji Dangote as saying: “About this philanthropy, I think from this year, I personally want to take it very seriously. I want to be much more aggressive than what we have had in the past.
“We already have a foundation which will do all these things, but I am trying to see what we can do to encourage, not only Nigerians, but other Africans.
“I am not going to give all my money to charity, but I am going to try my best and give part of that money to charity. I am working hard on it.”
The statement said in Benue State alone, the Group has been running an annual scholarship scheme worth 10million to indigenes of Gboko communities.
It said that in Benue State, 15 villages were electrified at the cost of N115million, adding that 14 blocks of classrooms have been constructed for the community around the company at the cost of N84billion.
It added that 19 boreholes were constructed for the communities, and that an earth dam valued at N50million was also constructed.
It said that apart from the monthly payment of allowances to traditional rulers, a vigilante contract to ensure N2million regular income to the community was also instituted.
“We have also donated N15million to the community’s development foundation, and we are helping through the community empowerment scheme, while our one hundred bed hospital has been approved for construction within the community,” Dangote was quoted in the statement as saying.
The statement said that in addition to N78million compensation paid during the takeover of the company, N60million inconvenience allowance has been paid to families. [myad]