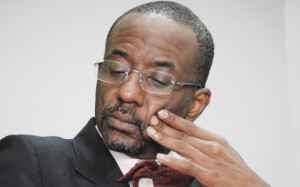 Lamido Sanusi had accused the Nigeria National Petroleum Corporation, NNPC of failing to transfer the amount to government treasury.

In a report published May, the Senate’s finance committee, which probed the allegation, said it found no evidence that the huge sum had been diverted or stolen, and described Mr. Sanusi’s claim as “incorrect” and “misleading”.

“There was never any unremitted $49.8 billion,” the committee, headed by Ahmed Makarfi, said.

The committee said funds not accounted for by the NNPC- which must be paid to government- stood at $927 million.

The amount includes $218 million; another $262 million being expenses the corporation could not satisfactorily defend in respect of Holding Strategic Stock Reserve; Pipeline Maintenance and Management Cost; and Capital Expenditure; and $447 million being balance of Royalty and Petroleum Profit Tax to the federation account.

The Senate adopted the committee’s findings yesterday, as its general assembly considered full details of the recommendations.

The decision let the NNPC and the petroleum minister, Diezani Alison-Madueke, off the hook, albeit temporarily, as an independent forensic audit authorised by the government, is awaited.

At the debates Thursday, the Senate President, David Mark, advised Nigerians to refrain from hasty conclusions as the committee had demonstrated that no money was “missing”, but only “unaccounted” for.

“Based on the facts we presented, I want to appreciate the details in this report,” Mr. Mark said. “Whether it is funds yet to be remitted or funds yet accounted for, I think we shouldn’t play politics with it.”

“As the committee pointed out, it’s unaccounted for and not missing,” he added.

Claims of the missing money became public in a leaked memo from Mr. Sanusi to President Goodluck Jonathan September 2013.

In the letter, the then CBN chief said as much as $49.8 billion oil receipts was missing.

He admitted, later, the figure was less, but said it would not be lower than $20 billion. The federal government denied the allegation, even before an investigation.

The government later admitted it could not account for $10.8 billion, but a meeting between the CBN, finance ministry, petroleum ministry and other officials, failed to reconcile the figure.

Mr. Sanusi was removed from office by President Jonathan in February, accused of “financial recklessness”, in a move many believed was to punish him for exposing government corruption.

Under mounting public pressure, the government announced an independent forensic audit of the NNPC, a government agency that constantly comes under allegations of graft- many of not investigated.

Despite ordering audit firm, PriceWatersCooper, to carry out the probe, the government has insisted no funds were missing. In an interview in May, Mr. Jonathan said if such an amount went missing, the United States of America would have known.

But while the government failed to account for the outstanding $10.8 billion for days, leading to repeated reschedule of Senate investigative hearings into the case, the NNPC and the petroleum ministry later claimed the money formed part of subsidy payments for petrol and kerosene, and cost for oil pipeline maintenance.

Asked to provide supporting documents, officials took weeks to do so, prompting the finance minister, Ngozi Okonjo-Iweala, who said she could not vouch for them, to call for a forensic audit.

The outcome of the audit is still expected.

But the Senate said Thursday it accepted the conclusions of the finance committee that Mr. Sanusi’s claims were misleading.

The Senate, however, rejected a recommendation of the committee that fuel subsidy be removed.

“On the case of subsidy, if subsidy has to be removed, let us enlighten the people and take a final decision,” Mr. Mark said. [myad]