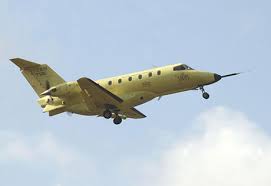 A four-seater plane flying from Nigeria to Gabon via Cameroon is said to have disappeared in the air.

According to Cameroon aviation sources, the plane, owned by the US Company, Global Aviation, took off from Kano, Nigeria at 1800 hours yesterday en route Libreville in Gabon, where it was scheduled to arrive at 2300 hours, after a stopover in Douala, Cameroon.

However, the station said that the plane, with only the American pilot on board, did not make it to Douala. It said the last contact the plane had with the control tower took place in Mongo, which is two hours flight from the Cameroonian economic capital.

Report says that search and rescue operations led by Cameroon’s civil aviation authorities have not yielded any positive results. [myad]