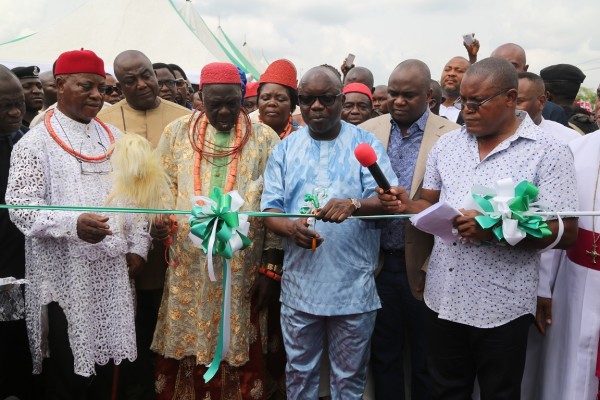 Governor Emmanuel Uduaghan of Delta state has commissioned sixty four road projects in Asaba assuring the people of the state that more projects would be commissioned before the end of his tenure.
Speaking during the commissioning today, Governor Uduaghan expressed satisfaction that his administration has executed such projects in Asaba, describing that Asaba as the symbol of unity of Delta State.
According to him, the projects would encourage investors to do business in the state, saying: “when I came into government, I told myself and the people of Delta State, that Asaba has come to stay as a state capital and so we must make it a befitting state capital.
“We have to live in unity as a state. We must take it as a responsibility to develop the state capital. We have a befitting Government House, the gains you get from a befitting Government House you cannot imagine it; visitors who see the Government House will be ready to do business with us and invest in other parts of the state.
“These are not glamorous projects. They are needed for the development of a befitting state capital. The location of Asaba is very strategic in the Delta Beyond Oil initiative. We will take advantage of its closeness to Onitsha market and make Asaba another economic hub.”
Dr. Uduaghan assured Deltans that the Asaba Specialist Hospital which has been remodelled and restructured when completed would be one of the best equipped hospitals in the country, adding that the fly-over projects in Asaba and Warri would be commissioned in the next few weeks.
Commissioner for Works, Mr. Funkekeme Solomon in an address, said: “over N487 billion has been committed to civil engineering infrastructural development across the state in various spheres.
“733 roads, 25 bridges, two flyovers and two airport development in Asaba and Warri have been embarked upon and to date, over N270 billion has been expended.”
The Asagba of Asaba, Professor Chike Edozien who spoke through the Iyase of Asaba, Chief Patrick Onyeobi thanked Dr. Uduaghan for his efforts even as the Chairman of Oshmili South local government council, Pastor Chuks Obusom said: “these projects will make life better for the people of Oshimili South local government and the people of Delta State.” [myad]