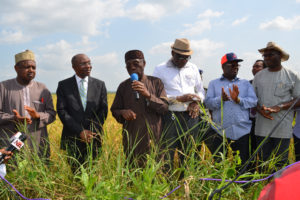 The Minister of Agriculture and Rural Development, Chief Audu Ogbe has showered blessings on the Ebonyi state governor, David Umahi for banning the sale of foreign rice in the state.
Audu Ogbe, who visited Ettem Amagu Rice Farm in Ikwo Local Government Area of Ebony state as part of his assessment of agricultural potential of the state  said: “Governor, I hear you banned  the sale of foreign rice in your  state, God bless you for it. I also hear you invited young men to come back from Lagos and work here, God bless you also for it. They will be happier here in this state than living under the bridge or substandard accommodation in Lagos, Abuja or elsewhere.”
The minister, who was accompanied by the Chairman, Presidential Committee on Rice production, Abubakar  Bagudu and Governor of the Central Bank of Nigeria, Godwin Emefiele, commended Umahi’s agricultural policy, particularly in ensuring massive rice production in the state.
Ogbeh advised youths to key into agriculture to diversify the economy and to see it as a way out of the present economic recession in the country.
He promised to bring agricultural equipment like rice harvesters, threshers, par- boiling drums, etc. to Ebonyi State.
“By the middle of last week, I had some machines ready for you (Ebonyi State). These include threshers and even new par-boiling drums which operate differently from what women are using. When those machines come, young men will be thought how to enter a farm and harvest rice for farmers. These young men and farmers will make so much money to the extent that they will become millionaires in the villages. So wealth is here (in farming).”

The minister announced the   Federal Government’s plan to plant 1,500 hectares of cashew nuts and set up two cashew roasting plants in Ebonyi State early next year, even as he expressed satisfaction with what he saw at Ettem Amagu and Akueze Rice Farms.
He described Ebonyi farmers as the real heroes of President Muhammadu Buhari’s push to diversify the nation’s economy especially through agriculture.
“Governor, next year, we shall plant for you 1,500 hectares of cashew nuts per the three senatorial districts in your state. “We shall also build two factories here for roasting cashew.”
He also promised that the Federal Government would rehabilitate the Ettem Amagu Ikwo Dam to encourage dry season rice cultivation in the state.
The minister explained that under Operation 1,037 of the Federal Government, a minimum of 10 dams per state and the FCT would  be built.
This was even as the CBN Governor, Godwin Emefiele said that the apex bank’s Anchor Borrowers Programme would commence next year to boost farming and tackle challenges confronting farmers.
Emefiele pledged the bank’s readiness to participate in the clearing and re-dredging of the Ettem Amagu Dam.
The Chairman of the Presidential Committee on Rice production and governor of Kebbi State, Bagudu, said that what he saw in rice producing states showed that the country has achieved self sufficiency in rice production and should therefore commence plan for rice export.
“Success recorded in the last one year is phenomenal. What we have seen in terms of rice output seems to suggest that the goal of self sufficiency which we hitherto thought will be achieved in 2017 might have already been achieved.”
Governor Umahi had, while welcoming them, commended President Buhari for reviving agriculture in the country.
He expressed the readiness of the state government  to partner the Federal Government in all season farming.
“There are over30 dams in this state. They are recharged by very near streams. So we want assistance from the Federal Government in the area of irrigation. We want assistance in the area of money to the farmers. We want assistance in the area of biomass plants.  The cost of buying diesel and   maintenance is too high; we also need   harvesters to assist our farmers.”
The team also visited the state’s modern rice mills in Oso-Edda and Ikwo where they saw live processed rice rolling out of the machines.
They were also taken to the popular Abakaliki Rice Mill where they witnessed the processing of rice paddies with locally-fabricated machines.
Before departing for the Government House, the team  saw mountains of rice husk in the Abakaliki rice mill  which the Umahi administration plans to use to generate electricity. [myad]