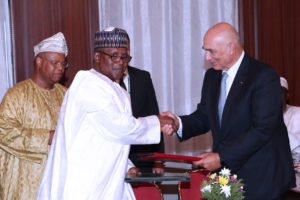 The Nigeria’s agricultural sector has received a major boost as the Dangote Group and the OCP Group of Morocco signed a Memorandum of Understanding (MoU) to bolster fertilizer production and business in the country.
The Dangote-OCP partnership is expected to lead to the creation of an integrated African platform and a global leader in fertilizer production, a statement from the Dangote Group said.
The collaboration between the two African conglomerates will help the Dangote Group mix the mass deposit of phosphate in Morocco with the gas potential in Nigeria in the production of fertilizer for the development of the agricultural sub sector in Africa.
President of the Dangote Group and Africa’s richest man, Alhaji Aliko Dangote said that the Agreement will support Nigeria’s effort to attain food security, create jobs and address rural urban drift.
Both the OCP of Morocco and Dangote, during the meeting, indicated that more than two million tonnes of customised fertilizer would be imported from Morocco in the next three years.
In his presentation, Dangote said of the $2.8billion total investment, $2.5 had already been committed to the fertilizer project by the Dangote Group, while seeing a growth from 3.6MT fertilizer capacity in 2018, to 4.6MT in 2020.
He said that by the time it starts operation in December 2017, the 3million tons capacity Urea Plant will be the biggest in Africa, and as well the second largest in the world.
According to him, the effort will bolsters Nigeria’s foreign exchange earnings, improve government revenue, create jobs, increase yield per hectare and further grow the GDP in the agricultural sub sector.
“The Joint Venture shall become the powerhouse of fertilizers to make Africa self sufficient in fertilizers.”
Jigawa Governor Abubakar Badaru who was at the signing of the fertilizer agreement, said the deal will enable fertilizer to be sold to farmers in Nigeria at cheaper rates.
According to the Governor, 250,000 fresh jobs would be generated as a result of the new agreement.
President Muhammadu Buhari and the Moroccan King Mohammed VI also signed other bilateral agreements which are: Cooperation Agreement in Strengthening the local blending capabilities and Agriculture Eco-System Agreement,  agreement on the Exemption of Visas for Diplomatic and Official Service Passport, Bilateral Air Service Agreement Between Morocco and Nigeria; Agreement on Marine Fisheries Cooperation; Agreement in the field of Agriculture, Agreement Between Moroccan Agency for Sustainable Energy and its Nigerian counterpart  while Memorandum of understanding between growth credit Agricole and NIRSAL is to be signed at a later date.
Speaking to newsmen at the state House in Abuja, Media Adviser to President Femi Adesina said: “two agreements were signed on fertilizer. One was that of Aliko Dangote for Joint Venture with OCP Morocco on complete fertilizer development for Nigeria and Africa sub-region. The second agreement is with Fertilizer Producers Association of Nigeria, FEPAN and OCP of Morocco on quick intervention in supply prospects and development of fertilizer where the company is planning to blend about millions of tons of fertilizer this year to be sold to farmers at affordable price.”
The OCP Group is a global leader in phosphate and phosphate derivatives markets. It is the world’s largest exporter of phosphate rock and phosphoric acid, as well as one of the world’s largest producers of fertilizer.
The Dangote Group is one of Africa’s most diversified conglomerates and the leading cement producer founded by the Africa’s richest person, Aliko Dangote. It is currently building the largest refinery, petrochemical and fertilizer complex in Africa with the capacity to refine 650,000 barrel a day. [myad]