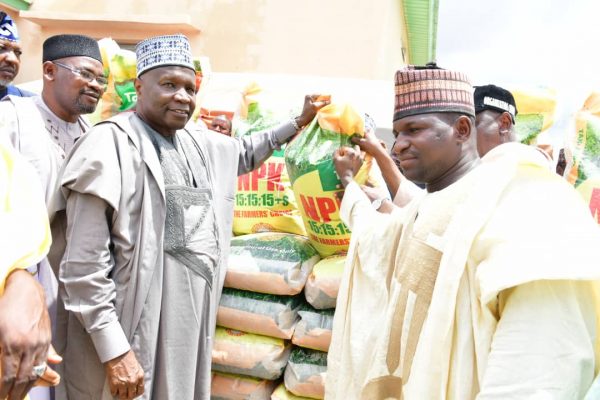 Gombe State governor, Muhammadu Inuwa Yahaya has kick-started this year’s farming season by flagging off the sales and distribution of fertilizers to farmers at Dukul in Kwami Local Government Area.

The governor said at the distribution point today, July 17, that the subsidized fertilizers is part of his campaign promises aimed at boosting agriculture, even as he gave assurance of food security, employment and broadening of revenue base of the state.

The governor directed the ministry of agriculture and all relevant security agencies to ensure strict compliance with the guidelines on sale and distribution exercise.

He appealed to the farmers to cooperate with those assigned with the responsibilities of sales and distribution across the state for the success of the exercise.

He also cautioned them against diversion or any form of mismanagement, adding that the law will take its course on anybody found wanting.

Governor Yahaya attributed the delay in this season’s sales and distribution of the commodity to security issues and other technical challenges in the production, procurement and distribution processes associated with the exercise.

The governor confirmed that through the doggedness and perseverance of our Ministry of Agriculture, “we have been able to overcome the challenges and record a remarkable success”.

He maintained that Gombe State is largely an agrarian state with over 80 percent of its population engaged in Agriculture.

“Supporting this sector is therefore crucial to economic development, food security and sustainable livelihood for our people.”

He explained that his government has engaged in different projects and programmes to revamp agriculture in Gombe with the state keying into many agricultural initiatives at both at state, regional and national levels to boost productivity.

“We are a key stakeholder in the National Livestock Transformation Program with the Wawa-Zange Grazing reserve as a model project, we are tapping into the great irrigation potentials of our three major dams of Dadin Kowa, Cham and Balanga in order to promote large-scale irrigation activities, our farm service centers are being revived to serve as one-stop shops of agricultural services and we allocated about 250 hectares out of the 1000 hectares earmarked for the Gombe Industrial Park for the purpose of developing an Agricultural Industrial Cluster in order to provide room for enhancement of the agriculture value chain through the processing of agricultural commodities that are highly abound.

” These, together with many donor-driven and private sector-led initiatives are turning Gombe’s agricultural sector around by diversifying our economy, improving productivity, enhancing revenue generation, creating jobs and promoting food security. We will continue to give our maximum support for the overall progress and development of the sector”. He used the occasion to urged farmers and herders to live in harmony with one another and avoid infringing on others properties and rights for peace to reign in Gombe state and the nation.  The governor pledged continued support to agricultural sector, saying “We will continue to give our maximum support for the progress and development of this sector considering the role its play in the overall socioeconomic development”. He also unveiled his government’s plan to establish more agricultural centres in Gombe State. He said, “It is our intention to provide a farm centre in each and every ward of Gombe state. Altogether, we intend to have 114 functional and operational farm service centres across the state”.