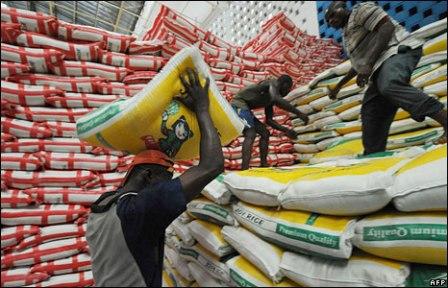 The apex body of Nigerian farmers, All Farmers Association of Nigeria (AFAN), has raised alarm over alleged illegal importation of 500 metric tons of rice seed into Nigeria by some Chinese, contravening the Seed Act 2019.

A statement by the Assistant Public Relations Office (PRO) of AFAN, Salisu Mukhtar, said that the Act spells out that anyone who contravenes the Act is liable to be punished commensurately to the offense stipulated in the Act.

The statement reads in part: “The Seed Act 2019 became effective in 2019 after its assent by Mr. President having been duly passed by the National Assembly.

“As it has been passed into law anyone who contravenes it shall be liable to punishment commensurate to the offense stipulated in the Act.

“We hear that some Chinese people have brought about 500 MT of Rice seed through the back door as far back as 2020 and some highly placed person in the Agriculture space then in cahoot with some proven fraudsters was putting undue pressure on the management of NASC to approve it for purchase by the federal government under the guise of distributing it to our rice farmers.

“The viability of the seed after two years is not certain and as it was illegally brought into the country no scrupulous Nigerian should facilitate its approval for use by our farmers as such any government official contemplating putting undue pressure on National Agricultural Seed Council, NASC, is well advised to stop or their job will be in jeopardy even at this time quite close to the exit of the Buhari administration.
“The Chinese people are already spilling the beans on the various amounts being extorted from them to facilitate the purported approval.”

According to AFAN, “The pressure is again mounting on National Agricultural Seed Council, NASC, to grant approval so that the federal government could buy it to support the farmers who suffered losses in the 2022 flood.”
The Association threatened that if those government officials fingered in the illicit deal fail to hands off, it will expose them based on the information they have about their movements.

“As at last week, it is said that a large sum of money has been collected from them (Chinese) by a fraudster hobnobbing with some highly placed officials who will soon be named if they persist in their nefarious activities.”