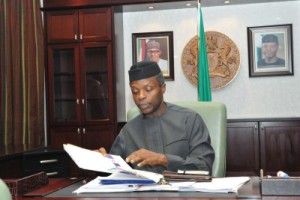 Vice President Yemi Osinbajo, has said that there is no regret in stopping the importation of food, especially in this era of foreign exchange constraints.
He said that since there is abundance of arable land, there is no need for Nigeria to continue to import food.
Osinbajo who spoke today, Thursday as he received in his office, a Russian delegation led by the Russian Minister of Agriculture who is also the Co-Chair of the Nigeria-Russia Joint Commission, Mr. Alexander Tkachev, noted that there has been improved local agricultural production which made importation less attractive, especially in this era of dwindling foreign earnings.
“The oil prices have gone down tremendously and yet large amount of foreign exchange is used to purchase food abroad and we have large arable land for agric. It won’t make sense, if you don’t use the land.”
The Vice President invited Russian farmers to invest in Nigeria, produce and import from here, adding: “we are just six hours away from Europe by air.
“Vegetables, flour can be exported to Europe from here, even our local market here is a lot.”
Both the Vice President and the delegation that included the Russian Ambassador in Nigeria, Ambassador Nikolay Udovichenko, Russian Deputy Minister of Agriculture, Mr. Evgeny Gromyko and officials of Russian’s firm-United Company (Rusal) agreed that Nigeria and Russia should deepen the existing diplomatic relationship, especially economically.
Professor Osinbajo said: “there is a lot of money to be made if Russian technology in agriculture is deployed locally.” Earlier, the Russian Agriculture Minister expressed his country’s willingness to enhance the existing trade relations with Nigeria.
He said that the Nigeria-Russia trade volume as at the end of 2015 exceeded $300 million, but added that there are potentials for improvement in the years ahead. [myad]