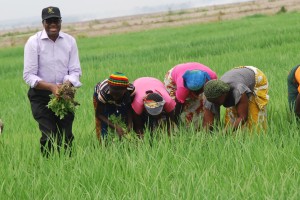 Senator Istifanus Gyang (PDP, Plateau North), has deployed 615 youths from 73 electoral wards of Plateau North to farm, with special training on post-season farming.
Senator Gyang, who spoke yesterday,  November 6 at the opening of the training, said that the move is to empower his constituents with  necessary skills to boost agriculture.
The Senator, who organised the training in collaboration with the Federal College of Horticulture, Gombe, said that people of the zone are mostly agrarian and hence the need for the training.
“What we have seen over the years is that we record a lot of waste after harvest.
“Not only that, we need to improve the process of packaging and marketing our products, so that we can draw a lot of profit from our farms,” he said.
Gyang stated that the country is an oil-driven economy but indicated that Nigeria needs to diversify if it must survive beyond oil.
According to him, there is the need to acquire the requisite knowledge as farmers to boost agriculture which is a viable alternative to oil.
The lawmaker called on the participants to take the training seriously as the materials used would be with them to always make reference to when needed.
He appreciated the people of Plateau North and the Peoples Democratic Party (PDP) for availing him the platform to be elected to represent the constituency at the National Assembly.
Rep Musa Bagos (PDP, Jos South/Jos East), asked the participants to give the training all the attention it deserves because the knowledge acquired would last a life time.
“Some of you will be the next millionaires of the next generation through the training, because the next generation of millionaires will come from agriculture and not oil,” he said.
Provost, Federal College of Horticulture, Gombe, Dr. Babawuro Ali, said that participants would, among other things, be trained on dry season and irrigation techniques in agriculture.
Ali, who was represented by Japheth Amila, a lecturer with the institution, said that the participants would also be taught post-harvest losses in fruits and vegetables; the causes and management.
“They will also learn rice production practices as well as transportation and marketing of fruits and vegetables.”
Mrs. Sarah Dung, a potato farmer who benefitted from the training, said that it is the first time such a training is being held in Plateau North.
Dung said that she cultivates her potato more during dry season than rainy season because of potato blight which is more prevalent during the wet season.
She said that she learnt a lot from the training, including how to preserve her crops to avoid wastage.
Mr. Ezekiel Gyang commended the Senator, saying that such is what is expected from representatives in the national and state assemblies.
Gyang, however, hoped that at end of the training, participants would be giving some funds to start their farms to put into practice the knowledge acquired.
Source: NAN.

See also:  Minister Lai Justifies His Campaign Against Fake News, As Heat Turns On Him