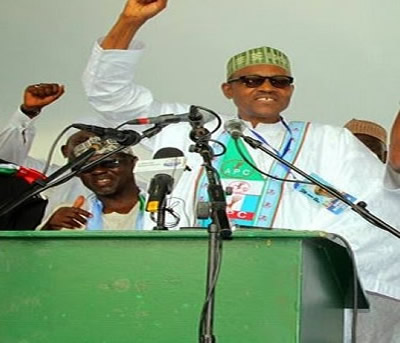 Presidential candidate of the All Progressives Congress (APC), General Muhammadu Buhari has assured that his government will run a market based economy; with clear and unambiguous regulatory framework and effective enforcement mechanism with zero tolerance for corruption.
To this end, Buhari promised that his APC-led government will insist on cutting off wastages in order to have funds available for capital and development projects that will assure prosperity for all Nigerians.
Director of media and publicity of the APC Presidential Campaign Organisation, Garba Shehu quoted General Buhari as saying, ahead of his town hall meeting at the Nike Lake Resort in Enugu tomorrow, that his envisaged presidency will deepen a viable free market economy in the country. He promised that businesses will enjoy marked differences in the environment for undertaking their activities.
General Buhari made it clear that Nigerian citizens in business, foreign investors and young entrepreneurs under the APC presidency will enjoy equal incentives and friendly business and investment climate.
“It is envisaged that this will help them to participate and engage in productive economic and  entrepreneurial activities geared towards the resuscitation and revamping of the nation’s economy and its capacity to generate millions of direct and indirect job opportunities for our teeming citizens.”
The APC flag bearer stressed that his party’s national economic policy will support, and insist on diligent implementation of annual budgets to guarantee accountability and transparency in public resources management.
“I recognise and appreciate that the world has changed with market based economy being the norm in an increasingly competitive global village. I know for a fact that no nation can exist in solitude and ignore the global trend; not even Russia and China, let alone Nigeria.
“Make no mistake about it, the Buhari/Osinbajo government will run a market based economy; but with clear and unambiguous regulatory framework and effective enforcement mechanism with zero tolerance for corruption.”
General Buhari said that in line with the party’s manifesto, an APC government will implement custom and import duties that support the prosperity of both indigenous and foreign investors and industrial development in the interest of job creation and the enhancement of citizens’ purchasing power.
“We shall liberalise government’s incentives to the business community and ensure that few business interests do not enjoy undue advantages against majority of our entrepreneurs to the detriment of the national economic prosperity.”
According to him, the APC government will be committed to encouraging the flourishing of micro, small and medium enterprises will be vigorously pursued in a manner that will give equal opportunities to all Nigerians with capacity and skills to generate wealth and invariably jobs.
On corruption, Buhari promised to draw a line and look forward, adding: “we shall plug all loopholes of wastages of our common wealth and discourage money guzzling ventures, particularly in the oil sector, electric power and pension. The essence is to conserve resources for the massive infrastructural renewal needed to drive our economic and social system and generate massive employment for our jobless masses.”
He stressed that an APC-led federal government will operate on the basis of rule of law and allow all cases already in court to continue without let or hindrance.
“There will be no witch-hunt of political opponents and their business interests as every citizen will be equal before the law,” he promised. [myad]