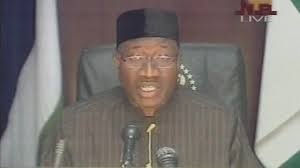 The President who spoke today at the annual agricultural show in Abuja, tagged AgriFest, explained that the N26billion is to appreciate the contribution of rural farmers to massive food production in the country and to encourage the farmers to plant thrice a year to boost food production and eliminate hunger and poverty.

“As crude oil prices decline, we must create new wealth from the richness of our soils, the vastness of our rivers and the abundance of our cheap labour,” President Goodluck Jonathan said at the Agric Festival, in Abuja on Friday. “We will produce more, and we will industrialize the agricultural sector.”

President Jonathan said “we have transformed the face of agriculture. Our country is producing more food than ever before. Our national food production has expanded by 21 million metric tons
“within the past three years. Our food import bill declined from N1.1 trillion in 2009 to N634 billion in 2013 and continues to decline; this is progress and we must continue to move forward.”

He said that the number of seed companies had also increased from 11 to 134 within the past three years, increasing access to high quality seed from 4,252Metric tons in 2011 to over 149,484metric tonnes in 2015.

According to him, with N900 Billion ($5 billion) of new investments in the fertilizer sector, Nigeria would soon become self-sufficient in fertilizer production, and turn into a net exporter of fertilizer.

As this happens, the price of fertilizers will decline, and farmers will be able to afford more fertilizers to boost their food production, Mr. Jonathan said.

The President also directed the Federal Ministry of Agriculture to henceforth provide, annual financial support for the Argungu festival to further spur the traditional fishing competition in Argungu and promote fishing eco-tourism, in the country,.

The Agriculture festival which held at the Eagle Square Abuja, tagged “AgriFest,” was organised by the Federal Ministry of Agriculture and Rural Development in collaboration with farmers and agribusiness operators across the country. [myad]