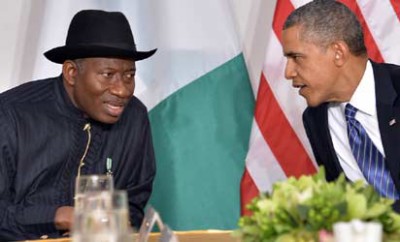 President Goodluck Jonathan said proudly in Washington DC that Nigeria is the 26th largest economy in the world and the largest trading partner of the United States in Africa.  He said that latest figures show the volume of trade between Nigeria and the U.S. to be $36 billion and is still counting.

Speaking at a dinner held in his honour by the United States Chambers of Commerce and the Corporate Council on Africa, President Jonathan said that his administration will continue to grow with greater cooperation between Nigeria and its allies in the United States Government and private sector.

He welcomed the support of the Obama Administration and both organisations for ongoing efforts to positively transform the Nigerian economy and  ensure that it becomes one of the twenty largest economies in the world by the year 2020.

Jonathan called for greater direct investment in Nigeria from the United States, even as he said that recent developments showed the need for increased international recognition of Nigeria’s role in the global economy.

President Jonathan said that the World Economic Forum on Africa which Nigeria hosted recently attracted over $68 billion in investment to the African continent in the form of Foreign Direct Investments, as well as private and public investments targeted at projects that would foster the agriculture sector, improve infrastructure such as roads, railways, hospitals, education, skill development and ICT across African countries.

“We remain the largest source of natural gas and have large areas of unexploited fertile lands for agriculture.  We have a huge stock of untapped solid minerals and we continue to make Nigeria an attractive destination for foreign investors through the constant implementation of our policy of creating an attractive and conducive climate for investors,” President Jonathan told the gathering.

The President said that while the oil and gas industry remains Nigeria’s main source of revenue and foreign exchange earner, his administration is working very hard to fully diversify the country’s economy and will welcome greater support from the United States for its efforts to make other sectors of the Nigerian economy more productive.

He assured American investors that his administration was taking all necessary action to overcome the Boko Haram insurgency and achieve greater security of lives and property in all parts of Nigeria.

President Jonathan left Washington DC to return home after the dinner and  talks earlier yesterday with President Barack Obama and other African Heads of State and Government at the first United States-African Leaders Summit. [myad]