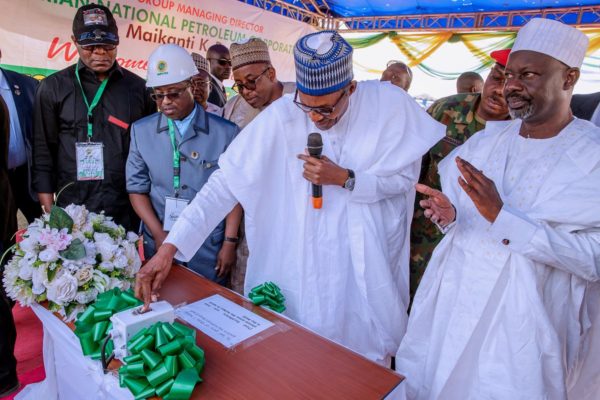 President Muhammadu Buhari has directed the Nigerian National Petroleum Corporation (NNPC) to extend its exploration to six basins in the country.

“Exploration in our frontier basins is imperative to the economy of the country.

“I therefore, have directed NNPC to intensify its campaign in the Chad Basin, to discover new hydrogen to extend the economy of the people within the region and the nation at large.

“Our next level is to ensure that exploration is extended to Chad Basin, Gongola Basin , Anambra Basin, Sokoto Basin, Dahomey Basin, Bida Basin and Benue Trough, for more prosperous Nigeria.

“Gas and oil remain critical to the present economic development of our country and the future,” he said.

According to him, they remain “key to the implementation of our budget at all levels of government.

He commended the NNPC for the exploration into Kalmani River II Well, which he said, will spur socioeconomic activities.

The president said that his association with hydrocarbon research started in Lake Chad as Federal Commissioner of Petroleum and Natural Resources in 1976.

“That era led to the drilling of 23 wells, two of which were gaseous, where NNPC acquired 2,000 square meters of land in the basin,” he said.

The president commended the NNPC and other stakeholders in the Kolmani-II oil well project, just as he paid tribute to some university lecturers abducted while undergoing research work on the project.

Buhari also commended security agents for working tirelessly to ensure that the area was safe to conduct exploration activities.

He reiterated his administration’s determination in pursuing its goal of ensuring adequate security, enhancing the economy of the country, as well as fighting corruption.

The Group Managing Director of NNPC, Dr Maikanti Baru said that the exercise started some years back, but had to be suspended in 2000 as a result of the abduction of experts working on the project.

While commiserating with those who made sacrifices towards ensuring the realization of the set goals, Baru said oil exploration is a capital intensive project that took many years to accomplish.

He however said that with patience and perseverance, success could be attained, and therefore commended all stakeholders, urging them to sustain their commitment.

According to the NNPC, the host communities of this Project are already benefitting from the preparation for the drilling operations, in terms of a 14.2km access road built in the area, health facilities, ICT centre and provision of boreholes.