Home BUSINESS OIL & GAS Fuel: Nigeria Being Held To Ransom By Marketers Who Won’t Sell At... 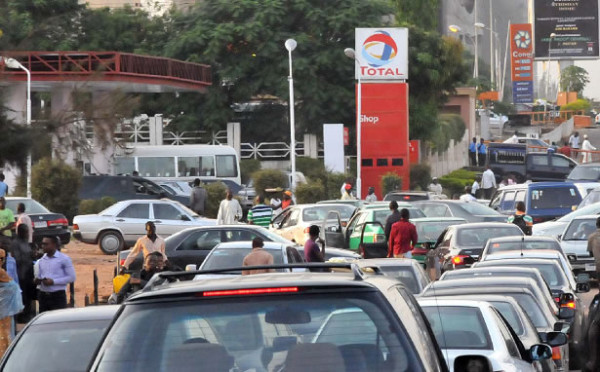 The Minister of State for Petroleum Resources, Timipre Sylva has said that some oil marketers are holding Nigeria to ransom because they have refused to sell the fule at the current official rate of N165 per litres, leading to the lingering queues in Abuja and other parts of the country.

Speaking with journalists today, July 6, shortly after the weekly meeting of the Federal Executive Council (FEC) at the Presidential villa in Abuja, the minister said that the fuel queues are as a result of shortages in supply as the Nigerian National Petroleum Company Ltd has enough stock of the product that can last the country for about 32 days.

According to him, there were queues in Abuja because selling at the recommended N165 per litre of fuel is considered by the marketers as unprofitable and the marketers have resolved to divert the product to other areas where they can make abnormal profit.

“If you look at it, there are no queues when you leave Abuja. In most places, only in the Abuja metropolis you continue to have these queues. So, is it that there is less supply to Abuja than to the rest of the country? It is not so.

“But within Abuja, because of the watchful eye of the federal government, they cannot sell at those prices. So it’s not a very attractive market for them. I think these are all things that we might have to be dealing with for a while until we’re able to fully deregulate.”

Speaking on the rehabilitation of the nation’s refineries, Sylva said the Port-Harcourt refinery would soon become operational, adding that the Dangote Refinery would commence operation by January next year.

Dangote Refinery is a 650,000 barrels per day integrated refinery and petrochemical project under construction in the Lekki Free Zone in Lagos, Nigeria. It is owned by the Dangote Group and is expected to be Africa’s biggest oil refinery and the world’s biggest single-train facility, upon completion.

The integrated refinery and petrochemical project which will meet 100 per cent of Nigeria’s refined petroleum product requirement and even have a surplus for export when completed is expected to be completed in 2023 after some delays and will generate 9,500 direct and 25,000 indirect jobs.

The Minister said: “So, these issues will gradually be resolved and we will get to the point where Nigeria will be fully supplied from in-country refined products.”

On why Kaduna and Warri Refineries’ workers are still receiving salaries even when they are not producing anything, the minister of state explained that most of the workers have been redeployed to other units of the Nigeria National Petroleum Company (NNPC) with a few others doing skeletal services to prevent pilfering at the facilities.

“But I can assure you that most of the workers in the refineries have been redeployed to other parts of NNPC.”